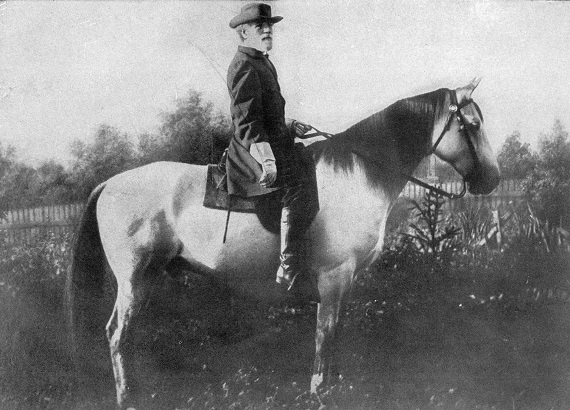 You would think that David Duke had somehow been elected president. Or, maybe in this topsy-turvy, Alice-in-Wonderland period of history we are living through, that that reactionary “bad guy” Vladimir Putin had somehow actually taken over the White House. The editorial din, the screams of outrage seemed to drown out all other news. Surely, the very fate of the republic was at stake.

What had happened? President Trump’s White House Chief of Staff, General John Kelly, had actually dared—and in public!—to defend the historical reputation and honor of Robert E. Lee. In our era of totalitarian political correctness, which parades in drag as an epoch of sublime “tolerance” and “free expression,” such views are the height of historical and cultural heresy—and not to mention what the Mainstream Media tells us—of political suicide. Such “heretical” views must not only be shouted down by what is termed “professional historians” (who act more like the Soviet politburo), but also banished from public discourse completely.

Kelly made his comments on the inaugural program of Laura Ingraham on Fox, “The Ingraham Angle,” Monday, October 30.

But what caught my attention was not some yahoo spouting bigoted screed. That is not what we saw, not what we heard. No; there before us was a lauded former Marine general, very calmly and reasonably making some points about our history and about Confederate commander Robert E. Lee who, until fairly recently and the subversion and ideological transformation of American academia by outright cultural Marxists, was held in high regard by most Americans. His admirers have included such larger-than-life historical figures as Sir Winston Churchill, Franklin D. Roosevelt, and Dwight D. Eisenhower.

Here is the critical paragraph that got General Kelly into so much trouble with the dominant, culturally Marxist historical profession (the entire interview is available as a video online):

“I would tell you that Robert E. Lee was an honorable man. He was a man that gave up his country to fight for his state, which 150 years ago was more important than country. It was always loyalty to state first back in those days. Now it’s different today. But the lack of an ability to compromise led to the Civil War, and men and women of good faith on both sides made their stand where their conscience had them make their stand.”

That sent the Leftist editorial writers at The New York Times, The Atlantic, and The Washington Post, and pundits on major news networks, into a frantic tizzy, scurrying to find weighty “academic” opinion not so much to present serious arguments against Kelly, but, rather, to ridicule him and, as it goes in most politically-correct academic circles these days, to paint him as ignorant and obscurantist, someone who should be shunned—and scorned.

So, The Post turned to two Ivy League history professors, both of whom have written scholarly tomes that satisfy the requirements of the modern establishment, cultural Marxist approach to our nation’s history: Stephanie McCurry and David Blight, both of whom eagerly weighed in. But rather than present specific arguments against Kelly’s comments, they took refuge in the “argument from Authority,” that is, regurgitating the modern historical narrative that: (1) the War Between the States was only about slavery, (2) the Northern side was engaged in a semi-religious crusade to free the slaves, while the Southern side was dedicated entirely to defending the peculiar institution, and (3) any Southerner who fought for the Confederacy was a “traitor.”

Implicitly, this argument assumes that secession was unconstitutional, and that for states to engage in it was an act of rebellion and, for individuals, an act of treason. Yet, despite the condescending assurances of Professors McCurry and Blight that this is the unquestionably correct view, the issue was not only far from decided in 1861, historically the preponderance of evidence—actual factual evidence—indicates that most Americans, and most of their leaders, believed during the pre-War period that secession was an acceptable constitutional option in serious circumstances.

In particular, the two academics have attacked General Kelly’s belief that the War was avoidable, if only there had been more of a willingness to compromise, to reconcile differences. For that inability, they blame a headstrong South. Yet as recent historians like William Marvel and Thomas Fleming have chronicled, it was the Lincoln administration that torpedoed every effort at peace during the critical months of early 1861. Marvel, in his 2006 study, Mr. Lincoln Goes to War (New York: Houghton Mifflin Company), sums up his detailed examination of the efforts to avoid war, writing: “It was Lincoln, however, who finally eschewed diplomacy and sparked a confrontation when he fully understood the volatility of the situation. Although he avoided the political blunder of firing the first shot, he backed himself into a corner from which he could escape only by mobilizing a national army, and thereby fanning the embers of Fort Sumter into a full-scale conflagration.” (p. xvii) [Italics are mine]

What is more disquieting about the position taken by McCurry and Blight is the underlying assumption that modern scholars have somehow come up with “new” facts that overwhelmingly support their views. To use Professor Blight’s expression, he and McCurry and other contemporary historians have “exploded” the pro-Southern reconciliationist narrative that earlier historians once held. Yet, the simple fact is that there is no boat load of new “facts” but only an ideological re-interpretation of the same old facts, and that re-interpretation is guided by the desire to confirm previously announced and pre-set Marxist objectives. It is that ideological template that controls the contemporary historical narrative and dominates the historical profession.

Earlier historians like the brilliant William A. Dunning, Charles Ramsdell, Avery Craven (The Coming of the Civil War), Francis Butler Simkins (The South Old and New), and more recently Ludwell Johnson (North Against South: The American Iliad, 1848-1877), Thomas Fleming (A Disease in the Public Mind: A New Understanding of Why We fought the Civil War), Thomas DiLorenzo (The Real Lincoln), and William Marvel are discounted, accused of pro-Southern bias, a failure to understand the underlying “racist” nature of American history, and an inability to comprehend the “real meaning” of the Constitution (a “meaning” that strangely eluded and remained mysteriously “hidden” to every president and every major American political leader beginning with George Washington through James Buchanan!).

To understand the attacks on Confederate monuments and on the reputations of men like Robert E. Lee, one must understand that those assaults are essentially ideological in nature, and that history is being used and manipulated to carry them out. This was first recognized by the late Eugene Genovese, perhaps the greatest of recent historians of the South, who noticed the obdurate unwillingness of fellow members of his profession to acknowledge the rich complexity of Southern history and their resistance to factual information that countered their tendentious views.

The multiple and feverish media attacks on General Kelly must be seen in this light. Ivy League historians like McCurry and Blight, and their epigones in the Mainstream Media, zealously seek to further a cultural Marxist vision of America and, thus, to advance the ongoing transformation of our society. For such professors and their indoctrinated translators, history serves only to facilitate their ideologically-driven agenda.

Abraham Lincoln has become, for most mainline conservatives, an icon, and, along with Martin Luther King, Jr., no opportunity is lost—it seems—on Fox News or in the establishment “conservative press,” to stress just how much… »