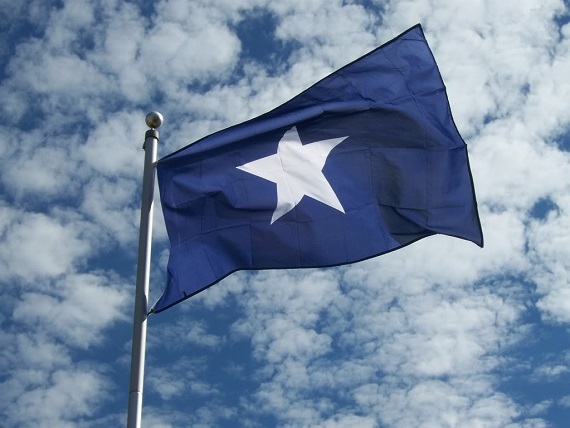 What was amazing about watching two dozen states and several hundred cities defy Donald Trump’s decision to take the U.S. out of the Paris Climate Agreement was that so little was made of it. It represented open defiance of the national government and a commitment to follow the principles of a treaty that our elected leader has specifically rebuked. I don’t know what you’d call it, but it looks a lot like nullification, the principle that any American state can refuse to obey certain chosen government laws and policies.

Nullification. That’s quite a strong position. Some might even call it treason.

Following the withdrawal from the Paris Agreement, several liberal governors went on to create a U.S. Climate Alliance that vowed to continue on with that treaty’s provisions and has so far got the backing of 13 states (Hawaii, Washington, Oregon, California, Minnesota, New York, Connecticut, Vermont, Rhode Island, Massachusetts, Maryland and Virginia) plus Puerto Rico. It was followed by a different set of states that declared they would follow — “meet or surpass” — the treaty’s climate goals by 2030, including Wyoming, Colorado, New Mexico, Iowa, Illinois, Ohio, Pennsylvania, Maine, Delaware and North Carolina.

That’s 23 states of the union, almost half, with more than half of the U.S. population and more than half the U.S. GDP. You’d think maybe the press and incessant cable news shows might have made a big deal of that, something more than a passing headline.

And that’s not all. There’s something called a Mayors National Climate Agenda, formed in 2014 to try to get support for the U.S. signing the Paris accord, and now after the Trump withdrawal with some 279 cities — including all of those with the largest populations — saying that they would ignore the president’s decision. This was followed by a meeting of the U.S. Conference of Mayors whose president declared that “the cities themselves are going to create a new national policy by the accumulation of our individual efforts.”

Days later, New York billionaire Michael Bloomberg announced that he was spearheading a new operation to support “innovative policies” in some 40 American cities to outflank and overrule the federal government not only on climate policies but to create policies on the local level that differ from Washington on gun laws, public health and immigration, at least as its initial phase. He is funding it with no less than $200 million from his own fortune and asking sympathetic philanthropists for similar funds. And he has promised to make up from his own funds the $15 million that the U.S. was to pay into the UN following the Paris agreement.

To me all of this looks like more than nullification — this has the smell of what can only be called secession. Not de jure secession, to be sure, not formal and legalized, but secession just the same across a whole range of issues where cities and states are deciding which laws to obey and which to be defied. I’d call it de facto secession.

Is that too strong a word? Let’s look at the sanctuary movement, which stands clearly in opposition to U.S. laws and practices and specifically to the Trump administration’s demand that cities cooperate with Immigration and Customs officials or face a cut-off of all federal funds. At the moment there are an estimated 476 counties and cities that have declared that they won’t follow the 1996 law that requires cities to cooperate with ICE — and 50 of them were added to the list after Trump’s January executive order threatened to defund them — plus what the Center for Immigration Studies lists as six states (California, Oregon, North Dakota, New Mexico, Colorado and New York) that declare themselves to be sanctuary states.

That’s nullification again, and on a massive scale.

Then let’s add on states that have nullified federal marijuana laws. To date, 18 states have passed laws making medical marijuana legal and five more have permitted recreational use of marijuana. The feds have so far not taken any action against them, since they clearly fear a significant backlash, but as far as the law is concerned these states are criminally liable.

And what if a state is nullifying all these laws, establishing itself as above federal law and federal jurisdiction? Doesn’t that add up to secession?

Take California, which is prominent in each of these areas of defiance and nullification — accepting the Paris Agreement, promoting sanctuary at state and local levels, passing gun laws that go beyond Supreme Court guidelines and right now considering a single-payer health system — socialized medicine — to replace Obamacare. It has recently banned all official state travel to Texas, Tennessee, Alabama, Kentucky, South Dakota and other states that have policies, particularly abortion policies, that it disagrees with. At this level, with the state in such a range of defiance, it is no wonder that Governor Jerry Brown, coming back after a state visit to China last month, said, “We are a separate nation.”

As a confirmed decentralist and anti-authoritarian, I applaud this whole movement toward what might be called states’ (and cities’) rights, and I would like to see such a movement spread, achieving by de facto secession the right to self-determination and self-government that alone promotes liberty.

And for those of you in the Lowcountry who may at first denigrate this movement, you might consider what would be the appropriate action if the offshore drilling companies actually decide to start their destructive exploration projects off the sea island coast. I can think of nothing better than the local sheriffs and deputies showing up to carry out the wishes and ordinances of the local cities and towns and refuse the oil giants permission. Charleston, Columbia and Beaufort have already pledged to ignore Trump’s withdrawal from Paris, so even more appropriate to fight his environmental assault on our coasts.

The red and the blue—states that is– are as different as the colorless black and white landscapes absent from the color spectrum. The concept of separate states for separate cultures is as old as Canaan… »