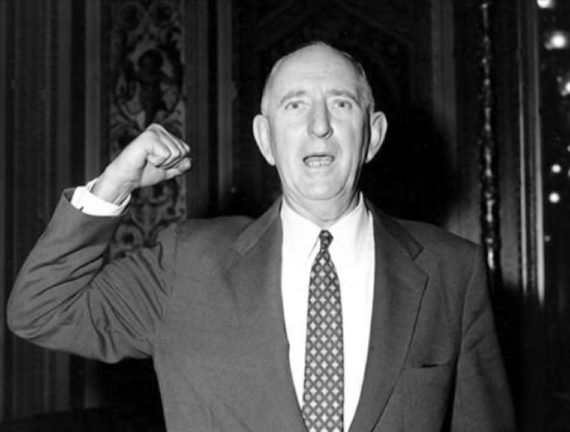 A Review of: Richard B. Russell, Jr. Senator from Georgia (UNC Press, 1991) by Gilbert C. Fite

“We can be as separate as the fingers, yet one as the hand in all things essential to mutual progress.” Booker T. Washington, speech to the Atlanta Exposition, 1885

Speaking of the current trend toward all-black dormitories, fraternities, and graduation exercises, Coretta Scott King recently noted that “this new separatism is a bad idea.” The widow of slain civil rights leader Dr. Martin Luther King castigated today’s politically correct segregation in the groves of academe as “wrong when it was forced by white people and, I believe, it is still wrong when it is requested by black people.” While most white Southerners today would undoubtedly agree with Mrs. King that black and white Americans “must find a way to live together,” most also, I believe, understand and respect the wishes of their black neighbors for churches, Masonic lodges and other civic, cultural, and fraternal institutions they can call their own. Nor do we automatically attribute black proclivity to social separation to any deep-seated hatred towards or prejudice against whites-despite the well-publicized rantings of some black supremacist politicians and scholars. Even such prominent critics of today’s apartheid as Mrs. King never go so far as to accuse modem black segregationists of racism. Their ideology is criticized but their motives are never questioned.

But the same rules rarely seem to apply to our fathers and grandfathers, white or black. With 20/20 moral hindsight, today’s self-appointed judges of other peoples, in other times and other places pronounce white Southerners who prefen’ed, as Robert Penn Warren put it, “to let the negro sit beneath his own vine and fig tree” guilty of racism of the most malicious and obscurantist variety. A quote or two from white supremacist politicians, like Mississippi’s notorious Theodore Bilbo, are usually considered prima facie proof of virulent and widespread negrophobia. Black Southerners who followed Booker T. Washington’s prescription are invariably denigrated as emasculated “Tom’s” or “handkerchief heads,” worthy of our pity, but not our respect. We are all-too-accustomed to this kind of self-satisfied moralizing from the common run of American scholars. But it is profoundly disturbing to find it in a scholar of distinction, one who has lived and taught in the South for over forty years.

In Richard B. Russell Jr., Senator From Georgia, historian Gilbert C. Fite mars an otherwise original and valuable contribution to American letters with the sort of selective moral indignation Northern historians so often indulge in when the subject turns to Dixie. Richard B. Russell Jr., Champion of White Supremacy would be a more descriptive title. Segregation and race relations in the South, are the leitmotif of Professor Fite’s 556-page work. Though he gives Senator Russell full credit for school lunches, agricultural price supports and subsidies, a strong national defense, and other projects dear to die hearts of New Deal Democrats, the author’s overall tone is hostile and accusatory. “Russell was a key participant in many of these revolutionary developments and adjusted to much of the rapid change that characterized the twentieth century,” writes Professor Fite. “But he could never abandon his dedication to the South’s traditional social values. The issue on which his ideas and attitudes could not be moderated was racial equality’ and integration. Because of his unwillingness to adjust to, or compromise on, this matter, and his masterminding of the anti-civil rights forces, he had to remain content with regional rather than true national leadership.”

One is given to wondering just how many of America’s great men could meet Professor Fite’s test of “true national leadership.” Certainly Lincoln, Jefferson, Madison, and Washington could not.

Reviewing Russell’s 1930 gubernatorial campaign, Professor Fite condescends to distinguish Russell from the negrophobic demagogues of the era, noting that “while Russell was a dedicated white supremacist, he was not a rabid racist. He was careful not to use the term ‘nigger,’ he did not play whites against blacks for political purposes, and he strongly opposed lynching and physical violence towards blacks. He had the elitist, paternalistic view of blacks so common among upper-class whites in the South during that period.” Professor Fite accurately reflects the mind of the South that elevated Russell to regional and national leadership. But he carefully drops the historical context out of which the segregated South emerged. And he virtually omits any discussion of white supremacist thinking or racial segregation north of the Mason/Dixon line or elsewhere in the world at that time.

Absent from any of Professor Fite’s numerous little homilies on Jim Crow is any reference to the Reconstruction-the period of black minority rule during which over ninety percent of white Southerners were stripped of their basic civil liberties. These were still recent events in the world into which Russell was born. To his generation of Southerners, black equality and political empowerment were inseparably linked with military rule, arbitrary searches, arrest, and detention, confiscatory taxation and pandemic political corruption. It is simply impossible to understand the attitude of white Southerners towards integration without some understanding of this traumatic period. Professor Fite, a historian whose earlier work on American agrarian movements reflects all the qualities of a first rank scholar, should know this.

A study of the Reconstruction era also provides a useful standard with which to judge segregation during the Russell years. It reminds us that much of the segregation that so outrages Professor Fite was initiated by blacks or the Reconstruction governments they supported. In his book on the Reconstruction, black historian John Hope Franklin points out that “among negroes there continued the process of organization of separate churches that began before the war.” He notes that blacks established their own schools, rejected affiliation with white labor unions in preference to their own associations, and “they manifested no desire to involve themselves in the purely social relations of whites as individuals or as groups.” Black Reconstruction governments did not overturn state laws prohibiting intermarriage, according to Franklin. “Negroes,” he wrote, “as a rule, conceded to the insistence of whites that they were a race apart; and they made little or no attempt to invade social privacies. They did not even attempt to destroy white supremacy except where such supremacy rejected negroes altogether as human beings.” That this attitude persisted among blacks until well after World War II is well established by no less an authority than the late Dr. Ralph D. Abernathy, trusted lieutenant of Dr. Martin Luther King. In his colorful autobiography, And the Walls Came Tumbling Down, Dr. Abernathy recalls how his own perception of race relations changed only after his military service abroad and the completion of a college education.

Professor Fite treats Russell’s opposition to the equality of the races as if it were a personal or regional eccentricity. Yet white supremacy was widely accepted by all classes of people throughout the Western world during most of Russell’s lifetime. It was the premise of British, French, Spanish, Portuguese, German, Italian, Russian, and, yes, even U.S., colonialism.

White supremacy was a central tenet of a number of religious, social and political reform movements originating in the North, from Mormonism to “eugenics” (now politely called “family planning”). At the time Russell first entered public life, the Ku Klux Klan was as powerful in Indiana as it was in Georgia. Malcom X recalls in his autobiography that he had “never set foot in the South” and based everything he knew about white racism on a lifetime spent in the North–particularly Nebraska, Michigan, and New York.

But the real stronghold of white supremacy during the era of Jim Crow were the world’s major universities. The disciples of Charles Darwin (who, incidentally, derided Southern fundamentalists holding to the old time religion) for decades taught “nordic” or “aryan” supremacy as unquestioned scientific fact. Books like The Passing of the Great Race by Madison Grant, The Inequality of Human Races by Arthur de Gobineau, and H.L. Laughlin’s Racial Stocks in Democracy were required reading for advanced thinkers of the pre-World War II era. Their assumptions informed U.S. immigration laws, the progressives’ approach to prison and criminal law reform, the latest trends in education, and much of our foreign policy. Typical of the scientific racism of the era is The Racial History of Man by Roland B. Dixon of Harvard University. Dixon attributes “nordic superiority” to their later evolution, longer skulls, and “enhanced brain capacity” in contrast to the more “primitive Mongoloid and negroid” races. In The Character of Races, published in 1924, Professor Ellsworth Huntington of Yale notes that “whether die present conception of racial differences is right or wrong, it seems destined to play a great part in the history of the next few generations.”

Within just one generation, however, the ideology of class would replace the ideology of race as the reigning dogma of Western intellectuals. The demand for “equality” – loosely defined and vaguely understood – would radically change not only race relations, but our traditional understanding of the purpose of government, the distinction between public and private spheres of activity, the rights of property holders, and the meaning of federalism. According to Professor Fite, Southerners like Russell resisted the new thinking for too long.

Timing appears to be everything when Northern historians hand down moral verdicts. Just as slavery does not become a “crisis” until after the last Northern state has discarded the institution, so racial segregation becomes morally intolerable only after it is out of fashion (at least on the surface) in the North. Accordingly, Professor Fite is willing to forgive champions of segregation like Lyndon Johnson who defected at the politically correct moment in history. But Richard Russell was incapable of this. Professor Fite himself explains why: “He [Russell] personified the ancient values of integrity, reliability, fairness, and kindness, and viewed women in a special light. These were values that were losing ground in American life and politics.” And he might also have added, these values have lost considerable ground in the writing of biographical history – if the Professor’s recent work represents the trend. Professor Fite’s indignation comes a little late in his career to be entirely convincing to this reviewer. He has held the Richard Russell history chair at the University of Georgia for the past fifteen years and received much research assistance from the Richard Russell library. Granted that a scholar is not required to entirely approve the attitude and conduct of his patron, he should, at least, refrain from acting as that patron’s moral judge.

In the Book of Genesis we are told that Ham, one of die sons of Noah, once found the patriarch naked and unmanned by strong drink. In a spirit of mockery, he told his two brothers, who piously averted their eyes and covered the old man’s shame. Perhaps Ham would have done better to wait to tell the story until his father was in the tomb. Then he could have written -with a generous subvention from the family foundation — a hostile biography of Noah and thus disguise impudent mockery as superior morality. Ham would have gained, perhaps, a little more prestige among his contemporaries. But he would not have escaped the old man’s curse.

There is much we can learn from Professor Fite’s work, without joining in his egregious moralizing, just as we can revere “the Georgia Giant” without adopting his generation’s view of racial issues. This is prudence – and morality too. For, Southerners who know their Bible know that we are not required -nor even permitted – to judge our fathers. We are required to honor them.