A City Upon a Hill

By Dissident MamaFebruary 23, 2018Blog
No Comments 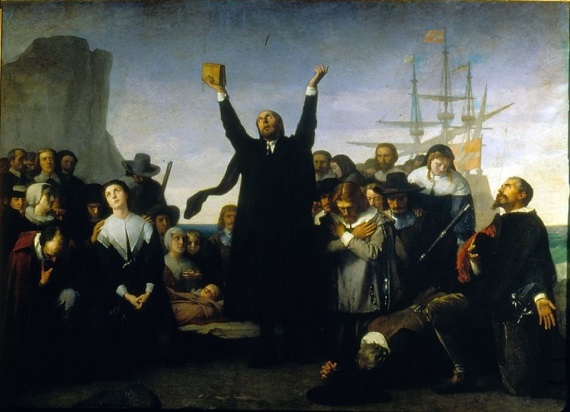 Funny that in all his talk condemning such “moralizing,” neo-liberal Barro went on to further pontificate about the Dems suffering “from a cultural disconnect from non-college-educated voters who have abandoned the party in droves.” But not to worry, the left’s “substantial inroads with upscale suburban voters have been more than offset by the loss of voters down the income spectrum, most of whom did not finish college.”

Translation: If I pepper my blue-blood insults with enough of an overall empathic tone, I can probably admit that “following all the [politically correct] rules has become exhausting,” while also simultaneously telling the poor and stupid masses how poor and stupid they are. Bless his heart, this New England son really tried, but unfortunately, moralizing is all this atheist, Russell-Moore-loving, Harvard “educated,” media elite really has to offer.

In fact, moralizing is and always has been the left’s religion. It’s the “puritanical progressives,” as I refer to them, who are constantly intruding into our lives through never-ending regulations, laws, educational indoctrination, corporate edicts, hive-mind social pressures, and media proselytizing. It’s a devilish scheme in which the pietistic purveyors of “social justice” have concocted a scenario that leaves no room for discussion, logic, or science.

And if you disagree with their flawless emotional creeds and ever-changing but always-correct edicts, well, you’re either an idiot, a hateful troublemaker, or you must just want people to die. That’s why these self-proclaimed Solomons feel no compunction in silencing, discrediting, maligning, bullying, punching, pepper-spraying, or perhaps even killing dissenters.

It’s this diabolical concoction of socialist politics mixed with religious fervor that has become the dominant “cultural power” and is even “more motivating than public policy,” to borrow Barro’s own words. It’s my contention that this holier-than-thou mindset is borne of New England Puritanism and has been a thorn in the side of liberty and self-determination ever since the Pilgrims came to America. So, let’s take a gander at history, shall we?

The Church of England, also called the Anglican Church, was established when King Henry VIII broke with the Catholic Church in 1534 in order to divorce his wife on grounds that she didn’t give him a male heir. Henry’s defiance of the Pope, who had denied him a divorce request, and break with Rome made this new state-run Church of England Protestant by definition, yet it still shared many liturgical practices with Catholicism. Thus, Anglicanism was (and still is) considered “high church.”

Enter in lawyer-turned-theologian John Calvin. His seminal writing – “Institutes of the Christian Religion” (first published in 1536) – challenged Catholic Church government and promoted divergent dogma, such as justification by faith alone and Sola Scriptura, and an abandonment of Church sacraments, rituals, and traditions.

By the late 1500s and early 1600s, there was a growing faction of Anglicans who had become disillusioned with the state ecclesiastical system. Influenced greatly by Calvin’s Protestant teachings, these Christians pushed for simplified Church worship, challenged what they deemed as apostasy of Anglican hierarchy, and wanted to shed themselves of liturgy they considered an impediment to practicing a more “pure” spiritual life – hence, the name Puritans.

Calvinism continued to spread, although there were varied belief systems and splinter groups within the movement at large, some more Puritan than others, but all united in opposition to Anglicanism. For instance, Congregationalists championed self-governing congregations independent from the Church. Presbyterians, who had a strong hold in Scotland, wanted a national church headed by pastors and elders. And Separatists severed all ties from the Church in order to create their own communities.

Kings Henry and then James harassed and mistreated all sects of non-Anglican Protestants, whom they considered rabble-rousing religionists. Persecution ranged from fines for missing Sunday services and Holy days, imprisonment for holding “illegal” meetings, loss of employment, and even execution in some instances.

In 1608, a group of Separatists fled England for Holland. Even though the Dutch were highly tolerant of these immigrants and their perceived unconventional religious practices, the Puritans worried about the loss of their English identity, as well as the corrupting effect morally lax Dutch culture was having on their children.

In order to protect their religious community and raise their families void of outside influence, the Separatists obtained a land grant in the New World. Under authority of the Virginia Company, they acquired a charter and set off in September 1620 to settle lands north of Jamestown.

Stormy winds and rough waters blew the Mayflower ship off course, and after two grueling months at sea, these Pilgrims landed in Cape Cod in what would eventually become Plymouth Colony. Since they found themselves outside the jurisdiction of the Virginia charter, the colonists in this vastly strange and unsettled territory drafted and signed the Mayflower Compact, which set up a majority-rule system of self-government under the divine authority of King James I.

England’s next monarch, Charles I, wanted to extend English territories along Massachusetts Bay. Consequently, more Puritans were able to obtain charters. In 1628, a small fleet journeyed across the Atlantic and settled in Salem, while another much larger company sailed to the emerging Puritan colony in 1630 and went on to establish Boston.

One of the greatest fallacies of American history is that the Virginia and Massachusetts colonies were monolithic, all endeavoring for freedom, all practicing the same religion, all bringing with them the same beliefs, cultures, and social norms. In truth, it wasn’t just geography and 13 years that separated Jamestown and Plymouth.

The people who settled Virginia were Anglicans who came from the South of England. They were comprised of gentry and indentured servants who sought economic opportunity, land, laissez-faire trade, and self-determination. They labored hard, but also desired down time.

The Puritans who settled Massachusetts hailed from East Anglia. Their faith-based colony consisted of strict personal regulations, collectivism, and “progress” through works.

“Thus out of small beginnings greater things have been produced by His hand that made all things of nothing, and gives being to all things that are,” said William Bradford, signer of the Mayflower Compact and governor of Plymouth Colony, “and as one small candle may light a thousand, so the light here kindled hath shown unto many, yea, in some sort, to our whole Nation.”

“Lastly and chiefly the way to prosper and achieve good success is to make yourselves all of one mind for the good of your country and your own,” stated the charter of the Virginia Company, “and to serve and fear God the giver of all goodness, for every plantation which our father hath not planted shall be rooted out.”

You can see here (emphases are mine) a few nuanced differences in their language. Whereas Bradford spoke in divine terms about the glories of production and spreading the Gospel through the Puritan collective, the Jamestown principles, although devotional in word, were more about the land and spreading community prosperity through individualism.

Another widespread misbelief is that the Pilgrims were seeking religious tolerance. But what these Puritans were really working toward was not freedom of religion, but rather, freedom from other religions.

Their aim was to rebuild humanity, “purify” civilization, and create Heaven on earth through their revamped interpretation and redesign of the Church. In short, the Puritans were activists. They had escaped what they regarded as the dead-and-gone confessionalism and formalism of the traditional Church, so these Pilgrims were finally unchained to plant and manifest God’s “right religion.”

As an Orthodox, we proudly claim to be the “one, holy, catholic (meaning: universal), and apostolic Church,” so I don’t slight the Pilgrims their passion. Admittedly, belief that your faith is “the one true Church of Christ” is a pretty consistent belief among most serious Christians then and now.

But what is troubling to me is that the Pilgrims pushed strict adherence to their constantly unfolding Protestant doctrines in such a coercive and majoritarian way. In preaching that only Puritanism could save mankind, any deviation was considered heresy and was boldly and often violently denounced. The Plymouth Colony was a religious monopoly built upon forced piety and corporate compliance, rather than salvation of the individual.

“Communities, and even families, were tightly controlled by the governing authorities … constables were assigned a group of around 12 families to ‘look in on’ and make sure they were functioning according to community standards,” explains independent historian Carl Jones in his analysis of David Hackett Fischer’s formative work, Albion’s Seed. “Submission to authority was the desired end in all aspects of Puritan society.”

In contrast, within the hierarchical structure of Virginia, free will was acknowledged by these Anglican Protestants, but self-control was instilled via the instruction of manners, familial expectations for social conduct and work ethic, and the practice of a serious but quiet faith. For example, youth were expected to respect their elders, but elders were expected to exhibit grace, strength, and wisdom.

The Puritans were more concerned with literal Biblical interpretation and moral behavior, while Virginians were more interested in property rights and fulfilling English common law in a godly way. As the New England Historical Society states, Puritan “people were less likely to be punished for larceny than to be punished for blasphemy, idolatry, drunkenness, lewdness, fornication, cursing or smoking.”

In their early days, both colonies struggled with starvation, disease, drought, harsh winters, maintaining order, infighting, and Indians, yet each slowly but surely overcame hardship in ways unique to her people. But with triumph come intruders, hangers-on, and co-opters. And in 1655, the first non-native agitators to meddle with the Massachusetts Bay Colony’s success were the Quakers – a people on fire for spreading the beliefs of their Society of Friends.

Likewise, Puritans were on fire for protecting their faith, smashing competing theologies, and keeping out dissenters, so Quakers were systematically shunned and persecuted. They eventually fled to other more religiously tolerant emerging colonies, like Rhode Island Plantation, which was founded in 1636 by Massachusetts-banished Puritan Roger Williams as a haven based in freedom of conscience, and became the site for the first Baptist church in America; and the Province of Pennsylvania, which was established by William Penn in 1681 as a refuge for oppressed Quakers.

I must say, as a libertarian, I don’t have problem with the English Puritans seceding from institutions and governance they saw as counter to their own freedoms, beliefs, and pursuits. Nor do I have a problem with the early American Puritans trying to maintain their principles through community standards and by purging trespassers.

Yet, it was these very same New Englanders who would become the intruders and invaders of the Southern colonies. It was these Puritan-steeped navel-gazers of the North who campaigned and crusaded beyond their own borders, conquering the “impure” Dixie rebels via political, economic, and military force, gathered the spoils, and then reconstructed their lessers, all in the name of God.