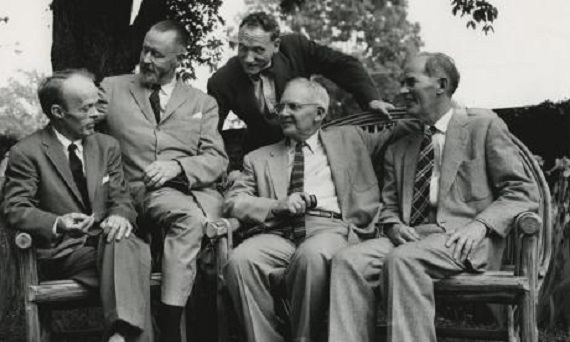 A review of The Lytle-Tate Letters: The Correspondence of Andrew Lytle and Allen Tate (University of Mississippi Press, 1987), Thomas Daniel Young and Elizabeth Sarcone, eds.

Considering Allen Tate’s well-documented contrariness, the four-decade-long friendship of Tate and Andrew Lytle must be considered one of the great creative acts in the lives of both men. That the two men could keep their relationship under “constant repair” through forty years of financial uncertainty, marital discord (Tate) and geographic dislocation ultimately attests to the symbiosis that arose between the Kentucky poet/essayist/biographer and the Tennessee farmer/novelist/ essayist/ biographer. Certainly Tate, ambivalently poised between Agrarian belief and Modemist doubt, must have found in the practicing farmer Lytle the concreteness, the levelheadedness perhaps missing in himself and the other Agrarians. It is not surprising, then, that, as Young and Sarcone note, “a closer, more personal relationship existed between Andrew Lytle and Allen Tate than… between any of the other Nashville writers.”

This collection, broken up into four time periods, begins with a 1927 letter from Tate in New York to Lytle at Yale, where he is studying drama under George Pierce Baker, Thomas Wolfe’s mentor. That Tate is searching for a sympathetic Southern ear is evident even in this first letter. “Interesting things are…at last stirring in the South,” he writes, prophetic words coming only a few years away from The Sound and the Fury, Look Homeward, Angel and I’ll Take My Stand. A sympathetic ear, indeed, is what Lytle lends his fellow Southerner; it is not until 1968 that the correspondence and, unfortunately, the friendship of the two end. (The deterioration of their relationship, precipitated by the accidental death of Tate’s young son Michael, is painfully re-counted in the recent Walter Sullivan memoir, Allen Tate: A Recollection.

Over these four decades, Tate and Lytle discuss an unusually wide range of topics, for these letters are, as the editors note, the most personal correspondence between any of the Nashville Agrarians. Not surprisingly, there is much discussion of works in progress, of English Department politics, especially at Vanderbilt, of marriages (and the end of marriages in Tate’s case), of money problems and to the Fugitive/ Agrarian members. Interesting insights, criticisms, and admonitions are interspersed throughout. As early as 1929, Lytle, sensing that the Agrarian movement may be the region’s next lost cause, states that “(i]t may be that we can be only John the Baptists unless certain issues define themselves in our lifetime.” Since one’s fear of failure often is commensurate with one’s devotion to a cause, it is not surprising that it is Lytle who expresses such foreboding, for it was he, perhaps more than any other Agrarian, who held a deeply rooted love of farming, of the rural life and of place.

Tate’s faith in the cause, however, eventually proved to be more problematic, as is evident in a key 1954 exchange, which opens with the following surprising statement by Tate:

It has occurred to me…that we made the South, and especially the Old South, an object of idolatry in the strict sense of the word…I have come to the view that no society is worth “saving” as such; what we must save is the truth of God and Man, and the right society follows…Place in itself is nothing, for it seems to me that “place” does not sustain us; we sustain place.

Such statements only confirm the suspicions some have always held about Tate, namely that he had embraced certain tenets of Agrarianism only in the abstract, or, as Louis Rubin would say, only metaphorically. Lytle’s response to his friend’s near apostasy, however, is somewhat measured: “This business of place and location exposes perhaps a temperamental difference between us…I don’t see how you can save the truth of God and man except in the terms of the conventions of some society.” Such restraint certainly attests to Lytle’s respect for Tate; the questioning by anyone else of so entrenched an ideology might not have been suffered so lightly.

The restraint that Lytle showed on this occasion as well as others was not, however, typical of his friend. For example, Tate, in a 1928 letter, worries aloud that the Nashville group will “lose Red [Robert Penn Warren] if he marries that girl,” that girl being Emma Brescia, whom Warren eventually married. Such directness, and, at times pettiness, apparently was characteristic of Tate, who, in his various capacities as a man of letters, often befriended other writers but who also seemingly reserved the right to attack those whom he had helped. Thus Tate, while conceding Randall Jarrell’s intelligence, writes that “[tjhere’s just something about Jarrell that I don’t quite like. He has a very nasty little ego,” and later, in another letter, says of Robert Lowell: “We like him but feel that he is potentially a nuisance.”

Perhaps the most interesting and, certainly, surprising attack on an individual comes early in the correspondence, and many…readers will be dismayed to learn that this rear-guard action is carried out against none other than Robert E. Lee. Tate, who is working on a biography of Lee, laments in a 1929 letter that his subject “is a mighty difficult crop to grow.” Later, however, he fires the first real volley when, in a comparison between Lee and Bedford Forrest, the antipodes of the Southern cause, Tate asserts that

Lee was a European to the last, and Forrest was a Southern American. I say this in a whisper…Lee had a kind of egoism that yielded to no influence…It was the egoism of self-righteousness, and it was absolutely unassailable…[H]e valued his own honor more that the independence of the South.

By 1931, one year before he abandons the Lee project, Tate’s dislike of Lee has deepened:

[T]he longer I’ve contemplated the venerable features of Lee, the more I’ve hated him…In the case of a man like Davis, certain purity, but in Lee, who was not weak, there is when we see under the surface an abyss, and it is to this that I do not want to give a name.

Clearly, the psychology runs deep here; Tate, prone equally to infidelity and invective, must have seen in the stoic, gentlemanly Lee a side missing in his own character. Yet the fact that Lytle shared some of Tate’s reservations about one of the foremost Southern icons indicates that more was at work than mere guilt. From several letters we gather that both Tate and Lytle bore some animus towards Virginia and what Tate saw as the “Virginian belief’ that only the “Quality” were true Southerners, a comment which prompts Lytle to respond: “As a matter of fact [the] good yeomanry was more Southern than the Quality.” Later, when considering the possibility of the two writers moving together to Virginia, Lytle wonders if a Tennessean and a Kentuckian can “return to Virginia.” Given this bias, it is not surprising that Tate and Lytle saw in the Tennessean Forrest the embodiment of the Confederate spirit

Admirers of Robert E. Lee should not despair, however, for these letters do range widely. Anyone who appreciates the many contributions of Andrew Lytle and Allen Tate to Southern letters and Southern culture should find in this volume a reaffirmation of the brilliance, diversity and humanity of two of the South’s great men of letters.

This piece was originally published in the Fourth Quarter 1989 issue of Southern Partisan magazine.

Tom Rash is a writer and teacher in Ashville, NC and a board member of Thomas Wolfe Memorial Advisory Committee, Inc. He is working on a documentary of Wolfe's life and influence.
View all posts