By Abbeville InstituteJuly 17, 2017Blog
No Comments 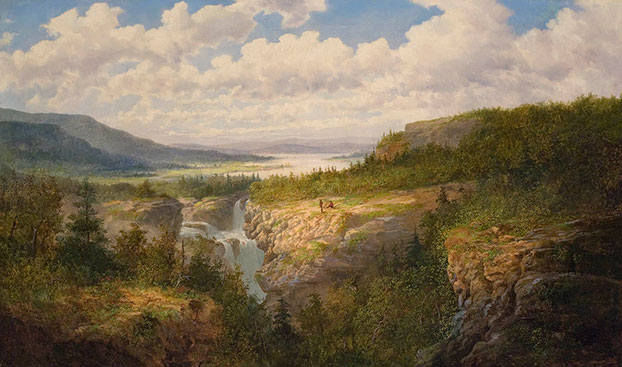 The patriarch’s clan
By the lake is gathered
To honor again
Their common father:
The matriarch with
Her circle of friends,
Cousins, with new wives’ and husbands’
And newer children,
The bond of kinship
Strengthened in their meeting.
Traditions are passing
From old hands to younger,
The fishing pole, the barbeque pit,
The keeping of the grounds.
The trees watch silently
Our communion
From one generation
To another.
Time presses ever onward,
But in the memories present
On our forthfared father’s day,
Even his relentless motion
For a while stands still.

In Fairbanks as a boy
Our car porch had two cars, yes,
But something else was there more harmonious:

Row after row of your long archèd nests,
Like batter drizzling gently down and hardened,
Some longer, some shorter, some all alone.

Us you didn’t seem to mind,
Happ’ly living on the rough wooden boards,
But Daddy and wife thought your presence impolite.

How many times did we watch Momma
With the broomhandle, arm outstretched,
Ready to break the wonesteads you worked
Tirelessly to make?  We waited, we crouched
In a runner’s position.  Were we breathing?
The blow!  All is commotion as out you poured,
Bewildered, and off we dashed to shelter.

Thirty years hence, the quest of Science
To alter nature has grown intense.
We mark its vict’ry by your absence.

And looking at the outline of your last
Desolated home, I long to hear you hum again
And to see your works adorn our walls.

By the Waters of Babylon

Balding tires on a beat-up F-150, four-on-the-floor
He does a good impression of the Man with No Name
As the thunder rolls along in a cloud of diesel fumes
Along a live track—that, at least, had stayed the same.

He lights a cowboy-killer, and inhales a quiet prayer
The worn-out tires spin on the wet asphalt through
His childhood home, one he no longer knows – his cares
Consist in banal matters of survival:

Prime numbers. He picked that up somewhere
Some other place, before he knew the price of fuel;
Before he knew he’d have to care.

“Ya know, my granddaddy was a farmer”
In the up-country, where the cotton was macadamized
To make sure there would be enough parking spaces
They don’t carry carpetbags anymore, but high-rise
Apartments, creeping boll weevils all through the fields.

His folks shipped him off to school in his day
Where he’d caught a kind of rheumatism:
It hurt to bend his mind too much, he’d complain,
And they’d covered his eyes with cataracts—
Dim, stained-glass windows for his soul

He was too young when the harvest came
And had to settle for the chaff in place of corn
Passing state lottery tickets across a counter
Hollow horns of plenty for the lost and forlorn:
A surplus of misery makes for a deficit of pity.

The right hand has forgotten her cunning.