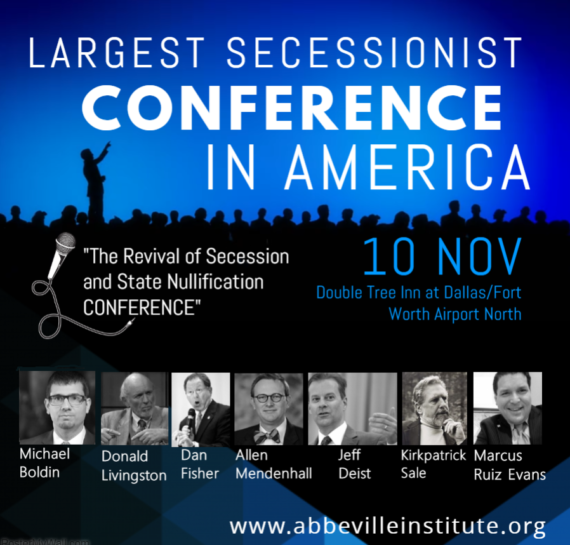 A Red and Blue Coalition?

By Donald LivingstonOctober 15, 2018Blog
No Comments On June 20, 1816, Thomas Jefferson wrote to William Crawford: “If any state in the Union will declare that it prefers separation … to a continuance in union, I have no hesitation in saying, ‘Let us separate.’” Jefferson thought secession can be a good thing. Lincoln in his first inaugural presented secession as something always bad: “Secession,” he said, “is the essence of anarchy.” In saying this, Lincoln and the Lincolnian legacy placed, in effect, a “Berlin Wall” around the American States. Once in the Union, a State could never secede. The Civil War was a show of force to demonstrate that if a State tried, it would be shot. Less than fifty years later, Francis Bellamy wrote the Pledge of Allegiance (1892) as a schoolhouse indoctrination to teach children the meaning of the Civil War which. He said it could be reduced to three words: “one nation indivisible.”[i]

If anyone is an American, Jefferson is, and if anyone is an American, Lincoln is. But their visions of what America is and ought to be are incompatible. We have inherited a fractured constitutional memory. And the question is: “To which of these visions are we to give our allegiance?” From 1776 to 1860 the Jeffersonian vision prevailed in America. From 1865 until the 1990s, Lincoln’s vision prevailed, but then something entirely unexpected happened.

In 1991, 15 states seceded from the Soviet Union. This was the greatest peaceful revolution in modern history. American political elites did not see it coming even though Soviet officials told them what was about to happen. Their minds were so controlled by the notion that a modern state is “one and indivisible” they could not imagine peaceful secession. That Soviet secession occurred peacefully had a ripple effect, and soon after a number of peaceful secessions occurred in Europe and more secession movements have arisen. The result is that secession is now thought of in Europe as a neutral act to be evaluated on its merits rather than as something necessarily bad as Lincoln classified it when he identified it with anarchy and a threat to government as such. Today even Americans are beginning to think of secession in a neutral way, despite Lincoln and the Pledge of Allegiance.  A Zogby poll taken in 2008 found that 22 percent of Americans said they thought a State had a right to secede from the United States. Ten years later in 2018, a Zogby poll found that 39 percent believed a state had a right to secede, and 29 were unsure. That means 68 percent of Americans are open to consider the right of secession. Only 32 percent thought that military force could be used to force a state back into the Union.[ii]  Evidently more and more Americans are identifying with the Jeffersonian side of their political tradition over the Lincolnian side.

That fact is exemplified in a growing number of secession movements such as “Calexit” in California and “Texit” in Texas, as well as a revival of various forms of State nullification. And there is a serious effort to invoke Article V and entirely bypass the central government by calling a convention of the States to propose amendments to the Constitution, something that has never been done. All of this State activity is a serious challenge to Lincolnian America which is based on the denial of State sovereignty in favor of national sovereignty, but it is at home in Jeffersonian America. If further developed, this paradigm shift could radically change the character of political discourse.

For example, Marcus Evans, the leader of Calexit, is urging a coalition between Red and Blue States to put their policy differences aside for a common interest in restoring state sovereignty. Calexit wants to leave the US and govern itself. They know the Red states would be more than happy for California to leave. The Reds would have more power in the Union, and would be free of such characters as Pelosi and Feinstein, and Californians would be able to pursue their own leftist agendas undistracted by the “deplorable” Jesus loving, gun loving, Red states.

Even if secession does not occur, such a coalition can revolutionize how we think about politics and each other. Ever since Lincoln, all political talk has been “nationalist” talk. There is one central government with the final say over what its powers are. Politics is thought of as a struggle between a nationalist left and a nationalist right with an occasional “bipartisan” compromise. Today in multi-cultural America where “diversity” is said to be our strength, there is no longer a “nation” of the sort the Lincolnian tradition could presuppose in nationalist politics.  Politics is now a struggle between Red States and Blue States to gain control of the supreme power to do unto their opponents what will be done unto them if they lose.

But what if we think in decentralist, Jeffersonian terms? What if instead of Red and Blue states fighting for control of the center to stick it to their opponents, they cooperate with each other to reduce central power and strengthen state sovereignty, even to the point of recommending secession? Neither can ever control the whole on impose a one-size-fits-all regime on an aggregate of 328 million people. Yet the effort to gain sufficient power at the center to do so means that every power gained in victory by one party will be augmented for its own purposes when it takes control. And so with every turn, more power and revenue is sucked to the center leaving less wealth and liberty at home–and leaving both sides more frustrated and desperate.

The question raised by Calexit is why not stop the absurd cycle of ever increasing centralization, unwittingly fueled by both the desire of Red and Blue states to control supreme power? Why not work to enjoy life in Red and Blue states?  Conflicts in America have reached a greater moral depth and complexity than in the 1850s. A coalition of Red and Blue on behalf of State sovereignty is the only way these two will ever agree on anything. Such agreement, though limited, is not to be despised. It builds mutual respect and that, in turn, can open the door to understanding the “other” from his point of view.

These and other topics regarding secession and decentralization will be explored at an Abbeville Institute conference to be held in Dallas November 10, 2018. Speakers include Jeff Deist, Allen Mendenhall, Michael Boldin, Kirk Sale, Donald Livingston, Dan Fisher (former primary candidate last June for governor of Oklahoma on a strong State’s rights platform), and Marcus Evans, leader of Calexit, who will talk about how California secession would be good for American federalism. This is the issue of the 21st century, and there is no better time to start the conversation.

[i] Francis Bellamy, “A Brief Synopsis of the Story of the Origin of the Pledge taken from the Detailed Narrative by Frances Bellamy, Author of the Pledge”. Congressional Record 91 (1945) House: 5510–5511.