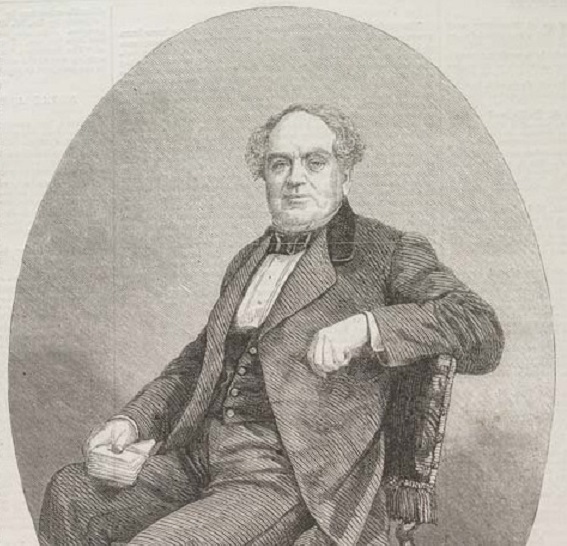 By Karen StokesNovember 5, 2020Blog
No Comments

In Washington, D.C., while serving as Secretary of War in the 1850s, Jefferson Davis met Ambrose Dudley Mann, a native of Virginia who was the Assistant Secretary of State (and the first man to hold that office). The two men were drawn to each other immediately and became fast friends for the rest of their lives. In her biography of her husband, Varina Davis wrote that Mann had “every Christian virtue” and that “Mr. Davis and he gravitated toward each other at once, and loved like David and Jonathan until extreme old age.” [1]

After the formation of the Confederate States of America, Davis appointed Mann, an experienced diplomat, as a commissioner to Europe. Mann left his country in March 1861, and would never return. After the war, fiercely unwilling to live under Yankee domination, he spent the rest of his life in France, hosting numerous Confederate expatriates at his home, and continuing to correspond with Jefferson Davis, who visited him in Paris in the winter of 1868-1869.

On New Year’s Day in 1884, Mann penned a letter to Davis. Always a keen observer of international politics, he wrote pessimistically about the march of Western civilization in Europe toward nihilism, socialism, and communism. The United States, he contended, was marching not far behind in the same direction, and that unfortunately, the only force which could have checked that progress, was the South—but a South now gone. He wrote to his old friend:

“I never was more bothered in mind for the formation of an opinion as to what point of descent the, so denominated civilized world is wending as on this New Year’s morning; nor do I believe that the brightest human vision can foresee. The propitious progress which it is making downward, in general demoralization, forbids a rational expectation that a halt is probable. Vice is in such supreme role everywhere that the masses of humankind are disgusted with government and are steadily embracing the sentiment of nihilism. Anarchy has become the impelling motive of their thoughts. Universal suffrage will not satisfy them. The potentates of Europe fancy that it will. Even Bismarck counts upon it as a cure for the Socialism of Germany. Gladstone seems to be quite willing to enlarge the elective franchise in Great Britain but he is met with the extremely puzzling question, to what extent? In like manner all the other premiers of the monarchs of Europe are secretly embarrassed for a trustworthy solution. But each, in the supposed interest of his reigning Mistress or Master, has no alternative but to make a ‘merit of necessity’ and allow every citizen to vote—and that before the lapse of a lengthened period. The political power thus created will inevitably sweep away the existing thrones. But it will not be inclined to stop with this procedure. It will institute Communism and precipitate a general division of property. The vox populi of the United States will not be far behind the lead of the movement. There was that virtue once in the South that would have efficiently checked such an attempt, but it has, as I contemplate the matter, actively disappeared. The sensibility of principle, in the control of affairs, no longer exists in that former Heaven favored land.” [2]

Mann saw little hope that the South could check or even resist the relentless movement toward collectivism in America. He lamented that many in South had become as “selfish” and venal as Northerners, but his fervent love and admiration for men like Jefferson Davis, Robert E. Lee, and Stonewall Jackson, never dimmed.

In earlier, unpublished letters to another friend, Mann asserted that a republic was the best form of government ever given to mankind, declaring his undying devotion to that principle no matter what the cost. His beloved friend Jefferson Davis was of the same conviction, and in a well-known quote, predicted that this principle would “reassert itself, though it may be at another time and in another form.”

Current events may not bode well for Davis’s prediction, but we can still hope that he was right.