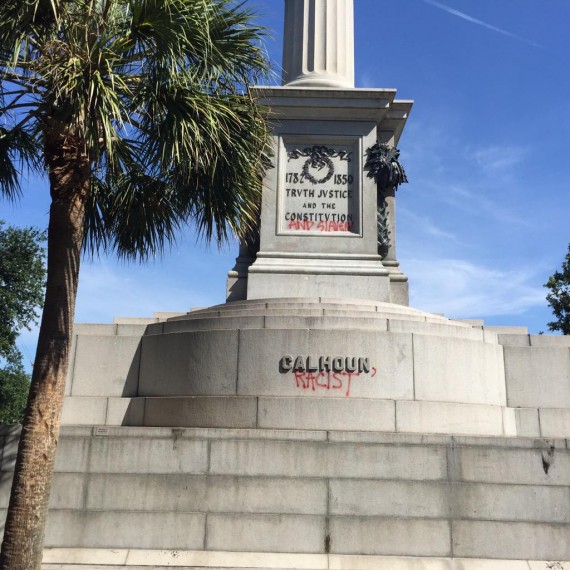 In the past few weeks two major interrelated events took place in these once United States of America that should serve as a warning for all Americans.  First, after the most contentious confirmation process for a Supreme Court justice in over 100 years, America has displayed its political-cultural division to the world and second, the ever-growing campaign of cultural genocide against all things Confederate continues unabated.

Most Americans, including too many Southerners, do not understand just how these events are related.  The use of mob-rule and guilt by accusation as orchestrated by the neo-Marxist cabal should be very familiar to defenders of Southern heritage.  The use of force and intimidation attempting to overturn the will of the people (as seen in the Kavanaugh hearings) is the same spirit and action that is being used to remove all things Confederate in Dixie.  For example, when Southerners defend memorials of their Confederate ancestors, they are quickly and vociferously met with the charge of “defending slavery” and therefore being racists.  Now notice that when the neo-Marxists could not stop the appointment of Judge Kavanaugh to the court by legitimate means, they attempted to do so by using the tried and true method that has worked well in the South.  Neo-Marxists quickly pulled from their playbook the well-used and successful technique of Accuse-Convict-Remove!  After all, it works well down South why not in Washington?

To implement their technique of Accuse-Convict-Remove, neo-Marxists will find a person or a group of people that will bring a hideous and revolting charge against their victim.  In the neo-Marxist world due process with its presumption of “innocence until proven guilty is “gone with the wind!”  After the neo-Marxists accusation is stated, the victim is simply pronounced guilty.  Once pronounced guilty, a process of denigrating anyone who offers proof of the victim’s innocence will commence.

As with Kavanaugh, when neo-Marxists desires to remove a monument or artifact which reflects positively upon Southern history, the technique of Accuse-Convict-Remove, is used.  First it is announced that the “offending” monument or artifact was established to promote “white supremacy” and is therefore a harmful and a hateful racist symbol.  As with Kavanaugh, the “guilt” is announced along with the charge.  When Southerners (regardless of color or ethnicity) bring forth proof that said monument/artifact was not erected or placed as a symbol of racism, they are forcefully scorned and belittled as being “defenders of slavery” and therefore unworthy of being heard.  Just as in the case of Judge Kavanaugh, no proof of innocence is allowed—the charge being so hideous, guilt cannot be questioned.  Removal of the offending person/item is all that is left to be done.  Fortunately for Kavanaugh, he had strong defenders, unfortunately the Confederacy does not—at least not yet.

This unjust Accuse-Convict-Remove technique which has been so successful in destroying Southern heritage and history and which was used against Kavanaugh is also being employed against traditional American values.  The ultimate goal of neo-Marxists is the destruction and debunking of America’s traditional values and replacing it with a Marxist value system.  Americans should understand that when neo-Marxists can have a Confederate flag removed because it “offends” someone, what will protect the Christian flag when it “offends” someone?  When a Confederate monument must be removed because someone finds it “offensive,” what will happen to a Christmas Nativity Scene when someone finds it “offensive?”

Traditional values as embraced by Southerners who hold dear a Biblical worldview and strict-construction Constitutionalism are anathema to Marxists.  The left’s hatred of these traditional values is one reason they often belittle Bible-believing, Constitution-loving Americans as “bitter clingers.”  The problem faced by the neo-Marxists is how do they destroy something that is so dearly held and loved by the majority of Americans?  They soon discovered the answer—slavery and/or white supremacy!  First attack the Confederate States of America as being the defenders of slavery and America’s sole advocates of white supremacy. Neo Marxists then continue their attack by stigmatizing anyone who defends the traditional values of the South, especially defenders of the Confederacy as vile, evil racists.  They then announce to the world that anyone who seeks to defend Southern heritage is using that term as a “code-word” for defending slavery and promoting white supremacy.  Neo Marxists then use their control of the “fake news” industry to deny Southerners an equal voice in defending their well-studied and factual defense of their history.

While the left is busy promoting its fake history about the South, neo-conservatives are busy agreeing with the neo-Marxists and therefore promoting the acceptance of the Accuse-Convict-Remove method of attack.  Is it any wonder that when neo-Marxists began their attack upon Judge Kavanaugh, unfounded and undocumented accounts were believed by so many people?  Every time a conservative talking-head on radio or T.V. announces that the South is responsible for Jim Crow laws (when it was New England that introduced these laws), or that the burden of guilt for slavery belongs to the South (even though slavery existed much longer in Massachusetts than in Mississippi and longer still in New York than in Alabama), or that the South committed treason when it seceded from the Union (even though the Declaration of Independence states that a free people have the unalienable right to “alter or abolish” any government they no longer like and have the right to establish a government they do agree with), the neo-Marxists agenda is actually being advanced by these conservative talking-heads.

Americans need to understand that the ultimate objective of the neo-Marxists is the destruction of the Constitution and its replacement with a Marxist-style document.  Remember that in three different places the Constitution either defines or defends slavery.  Once the neo-Marxist rabble has conditioned newer generations of Americans to remove anything they say is associated with slavery, what do you think will happen when the Constitution has been so identified?  The process has already begun.  The day after Judge Kavanaugh became Justice Kavanaugh, the new darling of the Social Democrats, Alexandria Ocasio-Cortez, tweeted that the time has come to get rid of the Electoral College because it is anti-democratic and “a shadow of slavery’s power.”[1] It should be obvious to all that the neo-Marxists have no desire to merely ban the Confederate flag or take down Confederate monuments. Neo-Marxists intend to use the odious stigma of slavery and /or racism to take down all traditional American values from Christianity to the Constitution.  The Confederacy is just the low-hanging fruit that makes the process possible!