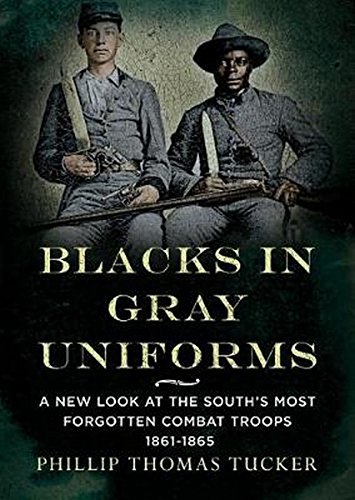 A Review of Blacks in Gray Uniforms (Arcadia, 2018) by Phillip Thomas Tucker

South Carolina Confederate history is my area of research, so I was interested to come across the book Blacks in Gray Uniforms, which gives information on some black Confederate soldiers from the Palmetto State, and I wanted to bring it to the attention of the readers of this blog. Phillip Thomas Tucker is a historian who “has long specialized on the most forgotten and overlooked subjects of the Civil War.” In his introduction, he states that there is ample evidence in the historical record, especially in primary sources, to establish that there were thousands of black Southerners, free and slave, who served in the Confederate armies in combat roles. He estimates this number to be between three and six thousand, besides many thousands more blacks who participated in the war as body servants, teamsters, etc.  Tucker also touches on the role of black soldiers in the Revolution and other conflicts in which Americans fought during the 18th and 19th centuries.

Further in the introduction, Tucker expressed his view that the South’s cause was the defense of slavery. He also emphasizes the fact that he consulted mostly primary documentation in researching his subject, such as the letters of soldiers, while dismissing many post-war Confederate writings which depict the “’Lost Cause’ myth of the ‘happy slave’ as created by generations of Southern writers and historians in an attempt to prove that slavery was a benign institution.” Yet later in the book, when speculating about reasons that blacks fought for the South, he acknowledges that there was “often familial-like feeling that existed between these white soldiers and slaves, both body servants and those slaves who remained at home,” a fact borne out by soldiers’ correspondence and other original sources. He goes on to state:

[S]ome Confederate soldier letters, from officers to enlisted men, have revealed the hidden, but true, depths of these personal and familial-like bonds that existed between black and white. Contrary to the Nazi-like stereotype permanently attached to white Rebel soldiers by today’s liberals of the politically correct crowd and as revealed in countless soldiers’ letters and lives, these Southerners were largely and in general decent God-fearing people from a religious rural society, and they possessed core Christian values that they took seriously and lived by as much as possible.

An example of the “forgotten bonds” that existed between master and slave is given in the person of Edgeworth Bird, a Georgia planter who urged his family to take care of the servants “decently and with kindness in his absence,” and wrote about them fondly in his letters home. Other examples mentioned are James A. Tillman of Mississippi, and Tally N. Simpson of South Carolina (whose wartime letters were published in 1994 as Far, Far from Home).

Tucker devotes a section to the “Free Mulattoes” who supported the Confederate cause. He notes that in Charleston, South Carolina, a group of free black leaders submitted a “glowingly patriotic” memorial to the mayor to offer their services in the defense of the state. A similar document was sent to the mayor of Columbia, South Carolina. John Wilson Buckner, a free man of color, enlisted in the 1st South Carolina Artillery and was “one of the forgotten black defenders of Fort Wagner, South Carolina, and he fell wounded in the strategic bastion’s defense on July 12, 1863.”

The author explores the reasons that free blacks and slaves would have been motivated to support the Confederate cause, and includes among them the “forgotten abuse of blacks by liberators in blue uniforms.” Tucker elaborates on this one neglected reason as follows:

Primary documentation and evidence has revealed that black women and children were often abused by Union soldiers to a degree that has suggested that many Yankees were not motivated to fight for the freeing of slaves because of a prevalent northern racial hostility toward blacks that was fully exhibited in cruel ways.

Readers are reminded in the book’s epilogue that the victors always write the histories of a conflict, and they tend to leave out facts that do not serve their purposes. By bringing out the facts about black Confederate soldiers, and giving them long overdue recognition, Tucker has done a good service for the historical record, although he acknowledges that his book presents “what is in truth only the proverbial tip of the iceberg in regard to the remarkable story of the thousands of Black Confederates who fought with great bravery on the battlefield from 1861-1865.”