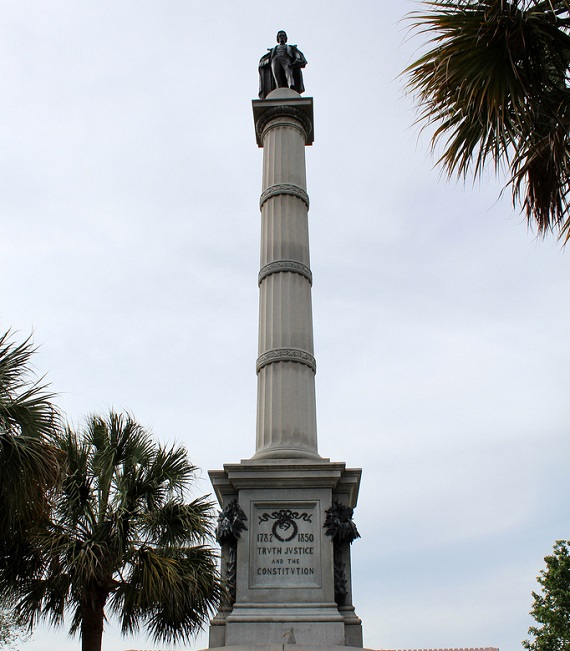 By Michael MartinNovember 7, 2018Blog
No Comments I grew up in Summerville, South Carolina, just a few miles from historic Charleston. This quiet little town is separated from the Holy City by some plantations, swamps, and marsh but shares the same fascination with local history. Folklore states that Summerville is the birthplace of sweet tea, the source being a newspaper article from 1890 that lists the menu for a Confederate veterans’ reunion and included, in addition to jaw-dropping quantities of beef, ham, and bread, “600 pounds of sugar” and “880 gallons of iced tea to wash it down.”

While the legend has been disputed over the years, the point is that many people in the Charleston area love it here and value their heritage. My experience growing up here cultivated a lifelong interest in all the local history. The area is filled with historic treasures including the first museum in America, the actual remains of the Hunley, as well as countless historic houses and monuments to famous South Carolinians. And I was always taught to appreciate the true diversity within the area.

Charleston, in the earliest days, was surrounded by Native American tribes and was home to a variety of groups like English Dissenters, French Huguenots, planters from Barbados, African Slaves, and Scotsmen. Growing up, I appreciated the history local Gullah Culture just as much as the others; I still walk through the streets of Charleston today and see the local Gullah sweetgrass baskets sell for top dollar to tourists flocking into the city for a hospitable experience. As a kid, I watched the Nickelodeon program, Gullah Gullah Island, which was filmed in the area and enjoyed it just as much as any other children’s show.

Despite this rich, diverse cultural heritage, many people have become divided over local symbols in the wake of the Emmanuel Nine shooting. While this shooting was certainly a tragedy, we need to focus on ways to bring people together, not divide ourselves based on heritage. Why should any average person, perhaps the average joe without a Southern identity, care at all about this? Our memory of the past helps shape our identity, understand the present, and predict the future. If we are not even allowed to look at, or even talk about our own history – on the land our ancestors bled to defend –  we might as well be sheep…

Just like London already has done, Charleston, South Carolina is currently implementing technology that will bring the state’s historic memory to life by providing human voices for monuments around the city. Ideally, this will allow people to scan a monument with their phone and listen to a monologue. It seems like a decent idea, on the surface.

This project began not long after August 2017, when Charleston Mayor John Tecklenburg released a letter to the city’s Commission on History recommending various changes to the city’s historical markers and stated: “I feel that adding to the historical story enables us to more fully understand and learn from our past.”

The changes Tecklenburg recommended include:

The project to create these talking monuments has been called Charleston Stories and it is subtitled Completing the Story: Bringing the Community together. Their website states that they are a “diversified private group of volunteers who are interested in historical accuracy and community harmony” and that their work “aims to lift the public spirit.”

But is the goal of this project really to bring people together? Denmark Vesey was a free black man that plotted a massive slave insurrection, and Charleston Stories is giving his monument a voice actor to tell his story and paint him as a symbol for freedom. The irony of this being that Vesey was turned in, and testified against, by other local blacks in Charleston. Meanwhile, some people want the monuments for John C. Calhoun, Wade Hampton, and the Defenders of Charleston get more plaques describing their part in the vast conspiracy of white supremacy. The project even proposed a new, clearly divisive and misleading text for Calhoun’s monument which read:

“This monument to John C. Calhoun (1782-1850), erected in 1896, was the culmination of efforts begun in 1858 to commemorate his career. It was erected at a time, after Reconstruction, when most white South Carolinians believed in white supremacy, and the state enacted legislation establishing racial segregation. These ideas are now universally condemned…The statue remains standing today as a reminder that many South Carolinians once viewed Calhoun as worthy of memorialization even though his political positions included his support of race-based slavery, an institution repugnant to the core ideas and values of the United States of America.”

This statement was rejected by the locals and sub-committee working on the project, having obviously been not acceptable or objective. Local Charlestonians have gone to great lengths to ensure whatever changes are made will be as unbiased as possible. While the concept of implementing oral history and technology for monuments seems promising, it will take a lot of time and effort from Southerners everywhere to ensure our historic parks are not turned into PC playgrounds.

Maybe we could compromise by keeping all the monuments exactly like they are, and add little air-conditioned shacks, complete with coloring books nearby. This will calm all micro-aggressed, triggered snowflakes that simply cannot stand their own history.

The South needs to wake up and realize that it’s okay to stand up for our history. A couple of weeks before Tecklenburg’s letter, a Charleston civil rights attorney named Armand Defner said that South Carolina’s Heritage Act is an embarrassment and “makes the state look stupid.” The Heritage Act, which was passed in 2000, protects state and local lands from any change whatsoever without a two-thirds majority vote in both the state Senate and House of Representatives. Defner likened this statute to the 1925 Tennessee vs. Scopes trial and stated “This law makes South Carolina look like a place for yokels, and that’s really unfair to our people.” Finally, Defner argued that The Heritage Act builds artificial barriers, stops dialogue, and discourages participation in the democratic process.

It has to be acknowledged that the snowflakes and social justice warriors are the real ones stopping dialogue and creating barriers. They literally make human chains, shout people down, and destroy anything of historic value that they do not agree with.

In fact, polls are consistently showing that the majority of voters, many including black Americans, want to keep Confederate monuments as historic symbols. This is why the Left is obsessed with microaggression and agitation. Their movement is so weak in its arguments and logic, that they must resort to tearing down the memories of greater men in order to feel satisfaction. Their only real hope for survival as an ideology is to trigger another Charlottesville, so they can stay relevant.

Charleston’s plan to implement mobile technology and make Southern history more accessible is a great idea, and will hopefully get more people interested. But “adding to the historical story,” as Mayor Tecklenburg hopes to do, is not such an easy task. It implies that the actual story is not interesting or dramatic enough. Most people have a hard time seeing past their own biases, let alone those of the private groups and politicians that are  trying to alter these monuments. It will take the effort of local communities everywhere, who hold the most important memories, to make sure the real story is being told.