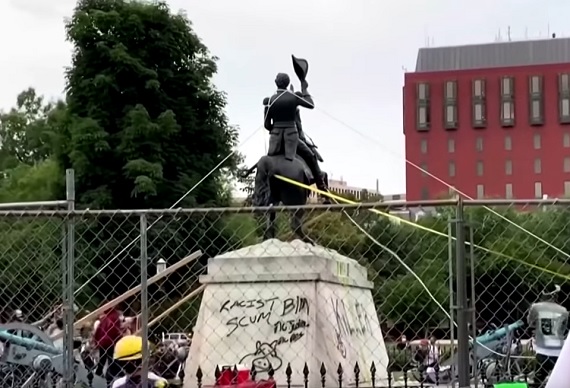 Civilization in the Balance

I am not a great fan of President Andrew Jackson.  Yet this equestrian statue (erected in 1852, five years after its commissioning), in front of the White House, is one of the most important pieces of sculpture in the world.  You see it was created by an American sculpture Clark Mills, in his studio and bronze foundry he established in Washington, DC.  It is the first bronze equestrian sculpture cast in America.  But, more importantly, Mills accomplished, with his creative engineering genius, something no one had ever done.  He had confidence in himself and he knew no better.  Up until the creation of this sculpture, no one had ever, in the history of art been able to create a mounted equestrian statue that was able to stand on its hind legs perfectly balanced without some third support like the horse’s tail or another object.  This American sculptor defied gravity and created equilibrium in a monumental sculpture for the first time in history.  Yet today in the enlightened 21st century ignorant savage anarchists – Americans no less, attempted to pull down this impressive and historic sculpture, unique to the world.  Their objective was to destroy it.

Today we hear moaning liberals, whose culture is wrapped up in the 14th Amendment rights of the individual, focused on “freedom” deny the more important protected right of “property”, which imbues within itself responsibility and civilization.  They claim that life is more important than any or all monuments, or art.  I disagree.  Those Americans today who attempt to tear down monuments and statuary in this nation are just as vile and filled with venom, terrorism, and hate as the Taliban that tore down the Bahamian Buddhas in Afghanistan, or ISIS that destroyed the works of Ashurbanipal in Iraq. Those who we reviled yesterday have now become paradigms of cultural destruction to these embarrassments to humanity.  These Vandals have branded all Americans to the world with marks of shame. They have lowered the stature of Americans, in the eyes of all civilization.  Monuments of great beauty and history are being destroyed now across America and in Europe as this contagion grows.  Western Civilization is on the edge of collapse into anarchy and entropy. And we have ignited this inferno.

Men may be born equal before the law, and maybe God.  But men are not born with equal genius or talent, creativity, or ability.  There are classes of men and the majority are not the same as the few.  It is the very few that have God-given gifts of ability to do what lesser mortals cannot comprehend or imagine.  It is these very few that create immortal works of art, music, prose, and poetry, invention, and great feats of imagination, science and engineering to pull the masses up to a higher level.

When the masses caught in the mire attempt to pull down and destroy the creative genius of these rare masters, in ignorance and stupidity, to cut down the lives of this rabble would not affect life on earth one iota, nor would any of these scoundrels be missed for long.  Artistic masterpieces of all kinds is great and cherished because it achieves what man strives for – immortality, the ability to transcend time through beauty.  When fools attack those creative symbols of immortality, deeper knowledge, and sublime understanding, they only send a message of their own desperate impotence, and incompetence, and prove their lineage to the primordial world of the jungle. Their vision is in the past of sweltering fetid swamps and bogs where man first climbed onto land, clawing his way through the stinking ooze.  Such men are the flotsam of despair and the rubble of disgust.  Their lives are mere grains of sand beneath Mt. Olympus – countless and indistinguishable.  Their significance is bleached by the tides of time lapping at the shore of their value to mankind.  They are just a reminder of history’s Dark Ages.  They stand frustrated in their inability to create and in their helplessness they only know how to destroy.  Their only hope is that someone will cheer on their collective childish cries and screams and honor them with some kind of participation trophy at the end of their raging fifteen minutes of infamy.  Today, Humanity, Western Civilization on the one hand and Anarchy and Hate on the other are in the balance.