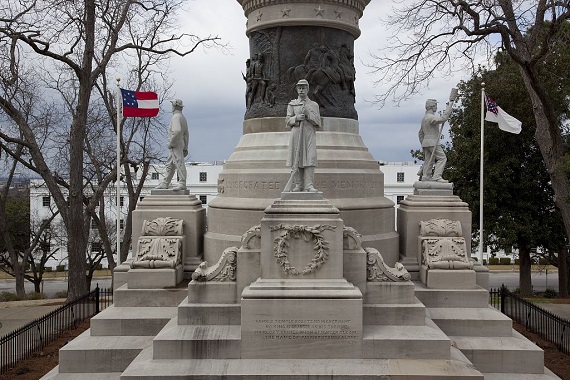 Did the Confederacy Oppose the Rule of Law?

Today is Confederate Memorial Day in Alabama. Most Americans believe the War and Southern history are synonymous, so much so that to many, the War has come to define the South. If you are reading this post and have followed the Abbeville Institute for any length of time, you know that our mission to “explore what is true and valuable in the Southern tradition” captures the four-hundred plus years of Southern history and the Southern tradition, a rich mosaic of people, place, and culture.

The War occupies an important part of that tradition, and for those who despise the traditional South, it offers an opportunity for “academics” to link “racism” and “injustice” to those that respect and even admire Confederate heroes and ancestors. You see, to these people, the Southern tradition is racism and white supremacy. In the process, these “scholars” create a false dichotomy of “righteous” and anti-racist Northerners with “evil” and racist Southerners.

As a result of our mission and the ongoing conversation about the War and its meaing, we spend some of our time writing about and discussing the War, both to parry attacks from these “academics” and to illustrate the “true and valuable” portions of the Confederate experience.  Thus, our organization has been called “neo-Confederate,” whatever that means. We also highlight Northern hypocrisy and have fun poking holes in the Northern “treasury of [counterfeit] virtue.” This includes pieces that ridicule St. Abraham Lincoln and the “righteous cause myth” of the War, a myth that has now become commonplace among “academics,” both professional and amateur.

The “righteous cause myth” is multifaceted, but it relies on three key arguments to “prove” that the War was “about slavery” and “white supremacy:”

2. Alexander H. Stephens said slavery was the “cornerstone” of the Confederacy in 1861.

3. The Confederate Constitution enshrined “Negro slavery” in the document and prohibited its abolition.

“Academics” then couple these arguments with post-bellum narratives about the “Lost Cause” and Jim Crow to show that not only did Southerners lie in the immediate aftermath of the War, they created Jim Crow to ensure that “white supremacy” would reverse the trend of Reconstruction and remain dominant in Southern political life. Confederate monuments, heritage groups, and holidays became the most conspicuous symbols of this attempt to “re-write” history by downplaying the importance of slavery in bringing about the War.

The monument in question is mute on slavery. Its simple inscription reads: CONFEDERATE HEROES/ CSA / ERECTED BY / THE GASTONIA CHAPTER, / U.D.C. / AND THE / J.D. MOORE CHAPTER / CHILDREN OF THE / CONFEDERACY/ THE NOBLE SERVICE / OF THE SONS OF / GASTON COUNTY IS OUR / PERPETUAL HERITAGE/ UDC/ IN MEMORY OF / THE / GASTON COUNTY / SOLDIERS.

What are the “false claims”?

He cites a 1912 dedication speech to “prove” that the monument was erected to promote “white supremacy.” But that’s not what the inscription reads.

Domby, however, represents the current crop of leftist “academics” who take pride in propagating a false narrative about the South. You see, Southerners did talk about slavery in the post-bellum period, and many did say that slavery was an important issue in antebellum America. Some even lamented the eradication of the institution. And you know what, most of these Southerners were racist who said racist things and believed that blacks should not be able to vote, but as I have illustrated before, so did the vast majority of Northerners in American society both before and after the War.

But most Southerners would not tolerate equating the War to slavery, unless, as James McPherson has shown in his book For Cause and Comrades, it was to prevent their own “slavery” at the hands of a Northern dominated government and society.

To say that, “There is no Civil War without slavery as an institution” distorts the political situation in 1861. Lincoln made it explicitly clear that he did not go to war to free any slaves but to save the Union. In other words, the War had everything to do with power, not slavery. Lincoln could not let seven States depart in peace, as Winfield Scott suggested he do. He had to save his Party and by doing so sacrificed the original Union.

There were still eight SLAVE STATES in the Union in March 1861–nine if New Jersey is considered–and four technically remained so throughout the War, with West Virginia, an [illegal] slave State, joining the Union during the conflict. Neither Delaware nor Kentucky abolished slavery during the War and remained slave states until December 1865. Slave auctions were still found in Kentucky until November 1865. So much for the righteous cause.

If the War “had everything to do with slavery,” why didn’t the United States government abolish slavery immediately in 1861? Why did Lincoln go to great lengths to insist that the War wasn’t about slavery? Because it wasn’t. To argue that. “there is no Civil War without slavery as an institution” misses the point. Secession did not result in war until Lincoln forced the issue. If “slavery” and “secession” caused the War, why didn’t the War begin in December 1860, or January and February 1861? Because James Buchanan wasn’t going to use force to stop secession. A better statement would be, “There is no Civil War without Abraham Lincoln’s decision to resupply and reinforce Ft. Sumter and Ft. Pickens.” He willingly made that choice, even against the advice of his cabinet knowing that it would lead to war.

Regardless, leftist academics also float the myth that the Confederacy did not believe in the “rule of law.” This Tweet from “historian” Kevin Levin is a nice illustration:

DeRosa’s articles, lectures, and forthcoming book on the topic of Confederate case law are more heroic than anything Domby, Levin, or other mainstream “righteous cause” mythologists can produce. They are swimming with the current, and by using statements like, “Let me be clear as a [sic] historian,” they attempt to bullwhip the other side into submission by highlighting their supposedly “superior” credentials. As John Lukacs noted in his outstanding book The Remembered Past:

The Abbeville Institute is dedicated to keeping the subject open no matter how hard the righteous cause mythologists insist that they have the last word and that the “case is closed.”