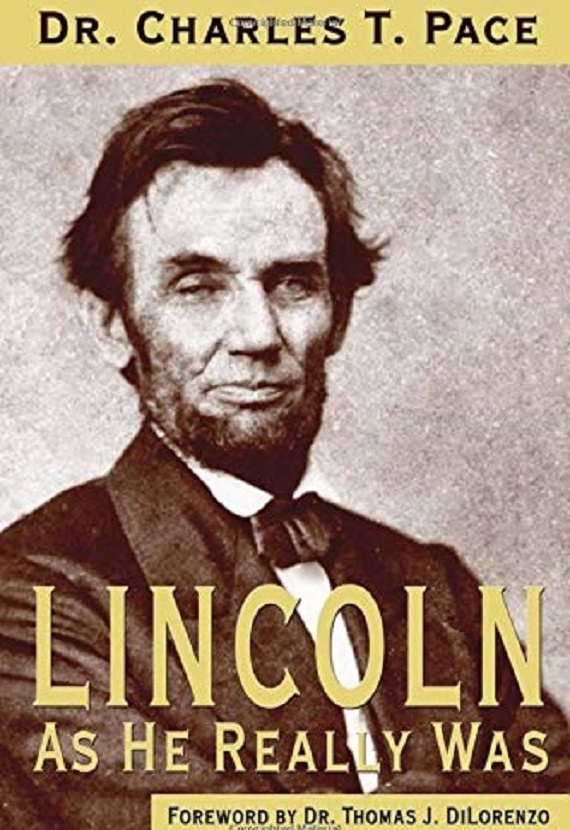 Lincoln As He Really Was A review of Lincoln: As He Really Was by Charles T. Pace (Shotwell Publishing, 2018).

Abraham Lincoln was American’s Robespierre, but his crimes only reflected the character flaws he had while in office. Dr. Charles T. Pace, a medical doctor from Greenville, North Carolina, has written a masterful political biography of Lincoln. He portrays Lincoln as a “politician’s politician, a political animal, ambitious, domineering, and ruthless, with a Machiavellian love of power without principle. His biography does not, however, demonize Mr. Lincoln but affirms that he was a deeply flawed man of great rhetorical talent, a man whose character flaws led him to wage war against the Confederacy and destroy the old republic of loosely organized states, replacing it with a centralized state.

Thomas J. DiLorenzo writes a masterful Foreword, connecting the cult of Lincoln with the sense of “false virtue” in the United States that was used to justify needless, brutal wars such as the Indian Wars, the Spanish-American War, the Philippine War, and the many U.S. interventions and invasions of sovereign states. He mentions the extent of the hatred of Lincoln during his lifetime, and the role of New Englanders in deifying him after his assassination and notes the results of Lincoln’s tenure as President: a “Soviet-style state” in which the union of states is forced at the threat of the sword. His excellent summary is a fine segue into Dr. Pace’s biography.

The introduction focuses on the lies of Lincoln’s legend—he was not a pioneer, did not like farming, and disliked physical labor, preferring the life of towns to life on the farm. He disliked reading, focusing on books on politics, never read a novel, and he lacked humility. His ambition was such that he tended to never be satisfied with his level of power, a trait those who knew him recognized. He enjoyed making as much money as possible. Dr. Pace notes that “His character was described by various associates as self-confident, aggressive, selfish, self-absorbed, and consumed with ambition for power” (7). Lincoln was obsessed with making his mark in the world, doing some great thing that would be remembered in the future. Dr. Pace is describing a narcissist, someone only out for himself, a utilitarian who used people for his personal ends. That may be the reason his contemporaries said he “never had a real friend.”

The account of Lincoln’s childhood notes that Thomas Lincoln, his father, was no country bumpkin, but was a well-respected member of the community. Abraham did not grow up poor, but as part of the middle class. He was physically strong, but one of his bosses said, “He didn’t love work half as much as his pay” (13). He was aggressive and prone to getting into fist fights. His darker side revealed itself when Lincoln was upset about his father’s dog barking, especially with Lincoln was trying to avoid work. “[Y]oung Lincoln sewed a coon skin to his hede, and the bigger dogs tore him to pieces” (14). While Dr. Pace does not belabor this incident, I believe it is important in helping to dissect Lincoln’s character. Lincoln would destroy anything, any animal, any human who interfered with what he wanted. His ruthlessness toward the dog reflected his ruthlessness in politics.

Lincoln was well-trained in rhetoric by his reading and was able to get continuous practice by speaking everywhere he could and through his practice as a lawyer. The source that helped lead him to use the Declaration of Independence, rather than the Constitution, in his talk about slavery was “Grimshaw’s History of the United States, written from “the New England viewpoint regarding slavery” (15). Lincoln was an abolitionist, but hid his views for political reasons. A well-known fact Pace mentions is Lincoln’s plan to send former slaves to South American and Africa. Realizing that the people of his home state of Illinois did not want Blacks in the state, Lincoln did not oppose their views—his goal was gaining power, getting elected.

Pace notes that Lincoln was not religious, but knew the Bible well, using quotations from it in his speeches in order to gain political points. In this area he tended to be more a man of the century prior to him, a man of the eighteenth century Enlightenment. However, his ideals tended toward the French Enlightenment; he was at most a deist, and perhaps an agnostic. Pace tends to think he leaned toward deism but was not a Christian in any sense, having rejected any special claims made for Jesus Christ other than Jesus being a great teacher. His use of the Bible for political gain reveals a cynicism and a drive to power that would use any means to reach its goals.

Lincoln’s supposed Christianity was only one of the myths of his life that Pace reveals as false. His supposed love affair with Ann Rutledge, at least as far as later accounts, was false. He was prone to depression, but depression haunted him during the times he did not have the power he craved.

Pace also points out Lincoln’s support of the Whig program—support of Northeastern industry, a high tariff, a national bank, and federal money used for “improvements.” In the Illinois legislature, Lincoln and his allies passed policy that almost bankrupted the state. When he joined the fledgling Republican Party, he continued to support a partnership with big business and government, reflected also in his practice as a corporate lawyer for the railroads.

School children learn of Lincoln serving in the Black Hawk War. However, Lincoln was in the reserves and was court-martialed twice for misconduct. He did not see combat, though he had no problem using his alleged service for political gain.

Lincoln was an effective rhetorician who knew how to move audiences—but without putting much substantive content into his speeches. He would tell stories, and in some audiences tell dirty stories, to loosen up his audience and entertain them. He won numerous court cases with such rhetorical skill, and used it to good effect in politics. However, he also heaped personal vitriol on his political opponents, leading to his being challenged to a duel that was averted at the last minute by Lincoln’s apology. He learned to be more subtle in his speeches while still being able to move audiences.

As a “pure politician,” Lincoln was concerned with power and not with concrete acts to help the people he represented. He was a party man who supported the Whig and Republican platforms to the letter. If there was a conflict between the good of the party and the good of the country, he chose the former. This happened after he was elected; he followed his wealthy New England backers who dominated Republican policy, even if it meant provoking a war with the South. Lincoln did all he could to avoid peace negotiations, and by sending supply ships to Major Anderson at Fort Sumter, he had the war he wanted when, as he expected, the Confederates fired on the fort. Pace places the responsibility for the war squarely on the shoulders of Lincoln. Making use of the best recent statistical studies of casualties, Pace notes that the actual death toll of the War Between the States is over 700,000 men. That does not include the immense suffering and increased death rate of Southerners after the war. The War’s purpose was to “preserve the Union” by force, not to end slavery, and the result was a destruction of the old republic of states voluntarily participating in the Union. Instead, Lincoln created a modern centralized state, the kind of state that inevitably takes away freedom from its citizens.

Pace brings out the familiar truth that slavery was becoming less economically feasible and was probably going to end without a war, though it may have taken a few years longer. At least, though, 700,000 plus military lives and scores of civilian lives would have been saved. Pace realizes that it takes someone with a reduced moral sensibility to suggest that the war was worth the cost in lives, injuries, and disease among both the military and civilian populations, since it accelerated the end of slavery. Normally one would think only a moral monster would suggest that the lives lost were worth what was “gained.” What was lost was the American system of government the Founders set up. The totalitarian potential of the centralized state was revealed in Lincoln’s suspension of habeas corpus and his jailing of political opponents. He ruled as a virtual dictator during the war. His legacy is a stream of abuses of power by the federal government: Reconstruction in the South after the war, the extermination of the Native American tribes, and thousands of arrests of innocent in 1919-20 by Attorney General A. Mitchell Palmer during the Red Scare. Although some of those arrested may have been Communists or anarchists, Palmer created a paranoia that led to innocent people being arrested and jailed. One can also note Franklin Roosevelt’s attempt to pack the Supreme Court and his near-dictatorial rule during World War II when he ordered setting up the Japanese Internment Camps. The intelligence community has abused its authority, with the CIA testing biological warfare agents on selected American cities during the 1950s and 60s that led to some deaths from the disease microorganisms they released. The FBI routinely spied on Americans. Posse Comitatis has been ignored. Currently, the National Security Apparatus routinely spies on Americans. Needless wars that not only take American lives, but usually result in exponentially greater loss of life among “the enemy,” are now routine, the most brutal of which (other than the “Indian Wars) was the Philippine War of 1899-1902, which killed hundreds of thousands of Filipinos.

The reach of the central government in everyday life has never been greater. It is to Dr. Charles Pace’s credit that he lays the origin of such abuse of power at the feet of America’s Machiavelli, Abraham Lincoln.