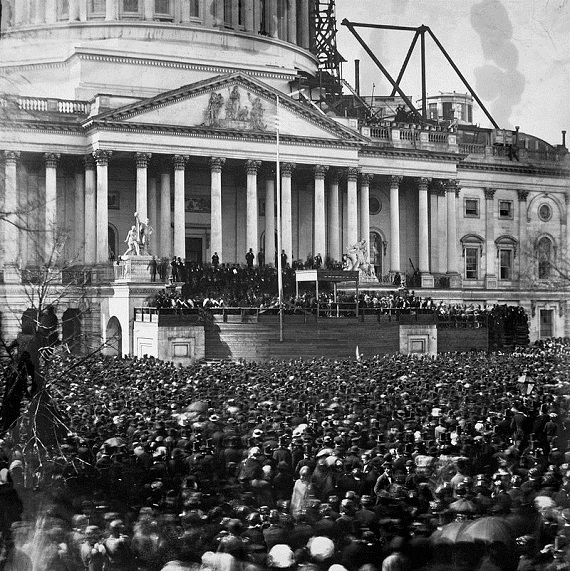 Lincoln or Lee? What Would Hitler Say?

By Ilana MercerSeptember 7, 2017Blog
No Comments So scribbled one Ricky Davila on Social Media (Twitter).

Indeed, an elderly Southern gentleman had ventured that President Lincoln, not General Lee, murdered civilians, a point even a Court historian and a Lincoln idolater like Doris Kearns Goodwin would concede.

While the Argument From Hitler is seldom a good one, Ms. Baldwin’s response was way worse. Were she an honest purveyor of news and knowledge, anchor-activist Baldwin would have sought the facts. Instead, she pulled faces, so the viewer knew she not only looked like an angel, but was on the side of the angels.

Pretty, but not terribly bright, Ms. Baldwin would be shocked to hear that the civics test administered by the U.S. Citizenship and Immigration Services (USCIS) recognizes as correct the following answers to questions about the “Civil War”:

If asked to “Name one problem that led to the Civil War,” you may legitimately reply: “States’ right.”

Brook would wince, but, again, your reply would be perfectly proper if you chose to name “economic reasons” as one of the problems that led to the Civil War.

Not even the government—the USCIS, in this case—will risk denying that the 1861 Morrill tariff was one cause of the War of Northern Aggression. Lincoln, a protectionist, was expected to enforce the tariff with calamitous consequences to the “the import-dependent South, which was paying [at the time] as much as 80 percent of the tariff.”

It’s fair to assume that the civics naturalization test (I took it) was not written by pro-South historians. Yet even they did not conceal some immutable truths about the War of Northern Aggression—truths banished from Brooke Baldwin’s network.

And from Fox News.

There, you must tolerate progressive Republicans, like John Daniel Davidson of the Federalist, warning about the dangers of identity politics in a majority-white country like the US. (Davidson should try out identity politics in a minority white country like my birthplace, South Africa, where the lives of white farmers are forfeit.) Another Federalist editor seen on Fox is Molly Hemingway. She has vaporized about the merits of “taking down Confederate statues.” If memory serves, that was a position the oracular Chucky Krauthammer was willing to dignify.

Back to the white, marginalized gentleman, mocked on CNN.

In all, Lincoln’s violent, unconstitutional revolution took the lives of 620,000 individuals, including 50,000 Southern civilians, white and black. It maimed thousands, and brought about “the near destruction of 40 percent of the nation’s economy.”

While “in the North a few unfortunate exceptions marred the general wartime boom,” chronicled historian William Miller,  “[t]he south as a whole was impoverished. At the end of the war, the boys in blue went home at government expense with about $235 apiece in their pockets.”  “[S]ome of Lee’s soldiers had to ask for handouts on the road home, with nothing to exchange for bread save the unwelcome news of Appomattox.”

Many years hence, Americans look upon the terrible forces unleashed by Lincoln as cathartic, glorious events. However, “The costs of an action cannot be dismissed as irrelevant to morality,” noted Mises Institute scholar David Gordon, in Secession, State & Liberty.

At his most savage, General William Tecumseh Sherman waged “total war” on civilians and did not conceal his intent to so do. On commencing his march through Georgia, in September 1864, Sherman had vowed “to demonstrate the vulnerability of the South and make its inhabitants feel that war and individual ruin [were] synonymous terms.” To follow was an admission (of sorts) to war crimes: “The amount of plundering, burning, and stealing done by our own army makes me ashamed of it.”

“For Sherman’s troops sacked and razed entire cities and communities“:

Sherman’s troops exhumed graves to loot the corpses. Sherman’s troops tore up little girls’ dolls and nailed family pets to doors. Sherman’s troops left countless civilians – including the slaves they were supposedly liberating – without food or shelter. Sherman ransomed civilians to armies in the area, threatening to execute them or burn their homes if they did not comply. Sherman had a few contemplative moments and was always careful to maintain plausible deniability, but he knew what was happening and let it happen.

Here’s the brass tacks (via William Miller, Yankee sympathizer) about Lincoln’s brutality and the extent to which the North upended life in the South:

“Confederate losses were overwhelmingly greater, representing a fifth of the productive part of the Confederacy’s white male population. Thousands more died of exposure, epidemics, and sheer starvation after the war, while many survivors, aside from the sick and the maimed, bore the scars of wartime and most war malnutrition and exhaustion all the rest of their lives.”

The South sustained direct damage as the war was fought, for the most, on its soil.

“Land, buildings, and equipment, especially of slaveless farmers … lay in ruins. Factories … were simply forsaken.” “Poor white and planter were left little better than ex-slave. … [A]n every-day sight [was] that of women and children, most of whom were formerly in good circumstances, begging for bread from door to door. In the destruction of southern life few suffered more than the ex-slaves.” By estimations cited in Miller’s A New History of the United States, “a third of the Negroes died” in their freemen, informal, “contraband camps,” from “the elements, epidemics, and crime.”

“The weakening of purpose, morale, and aspiration among the survivors was depressing enough to make many envy the dead,” laments White, noting that “rebel losses in youth and talent were much greater than the devastating total of human losses itself.”

“The men in blue,” said one Southerner late in 1865, “destroyed everything which the most infernal Yankee ingenuity could devise means to destroy: hands, hearts, fire, gunpowder, and behind everything the spirit of hell, were the agencies which they used.”

Still, despite having just fought a civil war, there was a greater feeling of fellowship among our countrymen then than there is today.

Struck by how achingly sad the South was, a northern observer, on a visit to New Orleans in 1873, cried out with great anguish: “These faces, these faces, one sees them everywhere; on the streets, at the theater, in the salon, in the cars; and pauses for a moment struck with the expression of entire despair.”

Today’s America lectures and hectors the world about invading Arab leaders for “killing their own people.” What did the sixteenth American president do if not kill his own people?

Yes, “Emerson’s ‘best civilization’ was about to be ‘extended over the whole country’ with a vengeance.”

Of this, Adolf Hitler wholly approved.

CNN’s Brooke Baldwin will be shocked—OMG! kind of shocked—to know that in his Mein Kampf, Hitler “expressed both his support for Lincoln’s war and his unwavering opposition to the cause of states’ rights and political decentralization.” (Primary sources: http://www.mondopolitico.com/library/meinkampf/v2c10.htm & https://archive.org/stream/meinkampf035176mbp/meinkampf035176mbp_djvu.txt

Hitler vowed that in Germany as well, he and his National Socialists “would eliminate states’ rights altogether,” political decentralization being the greatest obstacle for all dictators.

Pull faces all you like. Your guest was right. “Confederate generals, despite hearing news of death and destruction from home, strictly enforced orders protecting the person and property of Northern civilians.”