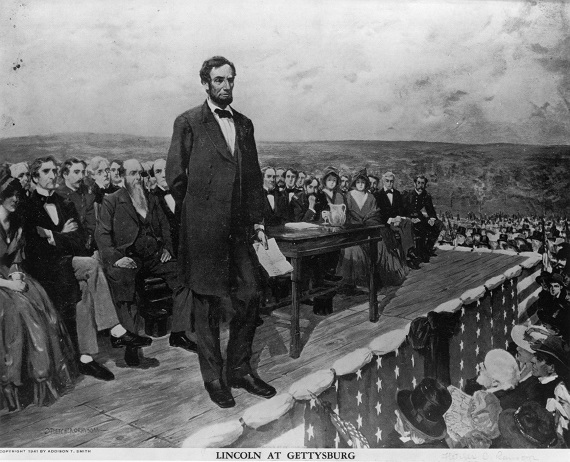 Perhaps the biggest falsehood ever pedaled about Abraham Lincoln is that he was devoted to the principles of the Declaration of Independence.  Exactly the opposite is true; he repudiated every one of the main principles of the Declaration with his words and, more importantly, his actions.  In our time the odd and ahistorical writings of Harry Jaffa and his “Straussian” cult followers have been the primary means of spreading this enormous falsehood.  (Jaffa was neither a historian nor a philosopher but a supposed expert in “rhetoric” who spent his career writing books instructing Americans about the allegedly “real meaning” of historical documents in writings that were often either void of historical facts or flatly contradicted by them).

Contrary to what every American is taught beginning with elementary school (or sooner), Lincoln did not believe that all men are created equal.  He repeatedly denied this for his entire adult life, even announcing during one of the Lincoln/Douglas debates that “I as much as any man want the superior position” to belong to the white race.  He was proud to be a white supremacist’s white supremacist. “Before, after, and during the Lincoln-Douglas debates, in public and in private, Lincoln used the N-word,” wrote Lerone Bennett, Jr. in Lincoln’s White Dream.

Lincoln invented a bizarre new theory of the American founding to “justify” his destruction of the voluntary union of the founding fathers that was initiated by the Declaration of Independence – their declaration of secession from the British empire.  As summarized by legal/constitutional scholar James Ostrowski, Lincoln’s absurd theory was that:

After seceding from the British empire the early Americans then seceded from the “perpetual” union of the Articles of Confederation and dropped the word “perpetual” from their new constitution.  Everyone understood that the citizens of the free and independent states, as they are called in the Declaration, were sovereign, not the government in the national capital.  As James Madison, the “father of the Constitution,” wrote in Federalist #39, the constitution was ratified by the American people “not as individuals comprising one entire nation, but as composing the distinct and independent States to which they respectively belong.”  And as Jefferson wrote in the Declaration, American government was to derive its “just powers” from “the consent of the governed,” organized as state and local political communities, not from the barrels of guns in the hands of federal soldiers.  That would be more like the Soviet Union or the Roman empire than the American Union.

Each state was considered by the founders to be a separate country in the same sense that Great Britain and France were separate countries.  As stated in the latter part of the Declaration, after defining the “United Colonies” as “FREE AND INDEPENDENT STATES” that are “absolved from all allegiance to the British crown,” the document says that “as free and independent states, they have full power to levy war, conclude peace, contract alliances, establish commerce, and do all other things which independent states may of right do.”  Free and independent states, not something called “the United States government in Washington, D.C.”  The phrase “United States” is always in the plural in all the founding documents, signifying that the free and independent states are united in participating in a voluntary compact of states.  It unequivocally does not refer to the United States government in Washington, D.C. or anywhere else.

In the Declaration of Independence Jefferson composed a “train of abuses” by the British crown that he said justified the colonists’ secession from the British empire.  Lincoln was as guilty as King George III of every single one of these abuses.  King George III had:

The author of the Declaration of Independence said in his first inaugural address as president that “If there be any among us who would wish to dissolve this Union or to change its republican form, let them stand undisturbed as monuments of the safety with which error of opinion may be tolerated where reason is left to combat it,” at once a defense of the idea of the voluntary union, peaceful secession, and free speech.  In an August 12, 1803 letter to John C. Breckinridge, who had inquired about the burgeoning New England Federalist secession movement, Jefferson wrote that if there is to be a secession of the New England states “God bless them both [the different confederacies, that is], & keep them in the union if it be for their good, but separate them, if it be better.”  In a January 29, 1804 letter to Dr. Joseph Priestly who had asked about talk of secession leading to eastern (“Atlantic”) and western (“Mississippi”) confederacies, Jefferson said that “I should feel the duty & the desire to promote the western interests as zealously as the eastern, doing all the good for both portions of our future family which should fall within my power.”

In sharp contrast to Jefferson, Lincoln’s words on the subject are heavy handed, violent, threatening, and tyrannical.  “[N]o state . . . can lawfully get out of the union,” he warned in his first inaugural address,” and “acts against the authority of the United States [meaning the government in Washington, D.C., aka, himself] are insurrectionary or revolutionary . . .”  He then used the words “invasion” and “bloodshed” to describe what would occur in any state whose citizens agreed with Jefferson and the other founding fathers that the union was voluntary; that the constitution had been ratified by the citizens of the free and independent states; and that any state therefore had every right to remain or not remain in the union on its own and without permission from anyone.

Lincoln’s words were nonsense on steroids backed up by violence and threats of violence.  Is that any different from the socialist nonsense spewed by generations of communists in the Soviet Union and elsewhere?  As Murray Rothbard wrote in his essay on “Just War,” “[T]he central government was not supposed to be perpetual . . . .  [D]oes anyone seriously believe for one minute that any of the 13 states would have ratified the Constitution had they believed that it was a perpetual one – a one-way Venus fly trap – a one-way ticket to sovereign suicide?”

The Fourth of July is supposed to be a celebration of the principles of the Declaration of Independence and of the American secession from the British empire.  Those principles were completely repudiated by Lincoln and his party.  After 1865 the American government’s “just” powers were no longer derived from the consent of the governed, as Jefferson so eloquently stated in the Declaration of Independence, but by the whims of politicians and bureaucrats in Washington, D.C. and enforced by their “supreme” court and their military and police state apparatus.

The Jeffersonians had long warned that if the day ever came that everyone’s constitutional liberty depended on the pronouncements of a few government lawyers with lifetime tenure, Americans would then live under a tyranny.  That tyranny arrived in 1865 and was celebrated by future tyrants such as “progressive” icon Woodrow Wilson who, in his early twentieth-century book on congress, wrote approvingly about how, with the effective abolition of federalism, states’ rights, the Tenth Amendment, and especially the rights of secession and nullification, the limits of liberty were indeed in the hands of those five politically-appointed government lawyers with lifetime tenure.  The wolf was finally in charge of “guarding” the sheep and has been ever since.

Thomas DiLorenzo is an economics professor at Loyola University in Maryland and is the author of The Problem with Socialism, The Real Lincoln, Lincoln Unmasked, and Hamilton's Curse.
View all posts