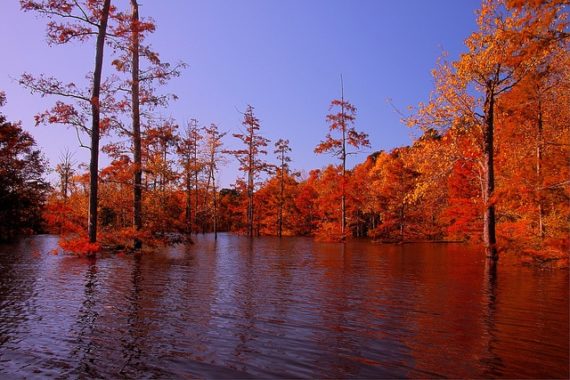 From distant ridge to distant ridge hunting horns serenading with stories before great fires;
Bobbing over hill and into hollow the fox hounds’ course voices;
The pitch of the pack rising with the tiring of the stag;
Watery break singing with a million mosquitoes;
Chip marrying the widow with whippoorwill song in April;
Shadow Tale mimicking the wind in beech trees;
An upland creek caressing an old log into bubbling song;
Duck wings breezing over a watery pin oak flat;
Old front-porch ladies quietly lilting youthful ballads;
Kettle bidding good memories with steamy report;
Vespers spreading grace at supper;
The heart sighing slumber’s release from ecstasy, weariness or woe;
Old bones creaking with joy for the life yet there;
A verse reaching to heaven on dying lips.

Here in these woods the autumn mind grows ripe,
Dependent on the senses, root and bloom,
Come from a ground deeper than dark and light
Under the needle floors of shortleaf pine.

This is the time of yielding, gathering in,
Of harvest festival and festive rest,
A time of plenty in a time of dearth,
The reaped fields torched, plucked nuts and berries spread.

The woods are dense, and hidden in themselves,
A resting-place for churchyards overgrown,
Unearthly headstones tilting toward their dust,
Departing dates and names just barely there.

Some say this time is thin time when the dead
And all those dreaded presences we thought
Buried for good when Christ’s thick blood was shed
Return as old familiars of the soul.

But do we meet and prove them on the verge
Of sight and sound, of taste and touch and smell—
The pumpkin’s candle-tongue and licking grin,
Wind-whispers in the chilling footstone-grooves?

Or is this world the only world there is,
Expanding to but never through its doom
Against a stillness nothing ever moves,
The stuff of grave and cradle, fatal breath?

Hard answers may lie far in upland trees—
Shades of the sun and moon’s translucencies—
Where we are both the hunter and the prey,
The bow pulled tight, the arrow through the heart.

A word in time, point made, first elements,
Then layered clay and sand, the bedrock’s head,
Tectonic plates pressed upward to a break,
The buckling juts of lime and salt and shale:

The marl’s bone-print of species long extinct—
The saber-tooth, sloth, elephant, and whale,
The holly and the laurel—crimpled hills
Of oak and gum, bois d‘arc and hickory:

Red wiggler, cricket, scorpion, oak-toad,
The slithering copperhead and moccasin,
The silver-minnow, bowfin, long-nosed gar:
And all across the cloudless flyway skies

Over the wild hogs loose in tawny corn,
The black bear clawing down a slippery-elm,
Pawed honey on the tongue—the wary squirrel,
The bobcat pouncing on the startled hare.

And there, like fallen blossoms of the stars,
Still twinkling under dark fire-seeded fields
Or fruiting in a cold late autumn dawn,
Our natives hold their foreign ground below

The battle of the masses, zone on zone,
The primal sky-gods fighting in a rain
That soaks the honeysuckle, arrowhead,
Witch hazel, goldenrod, and mistletoe.

And this is what we climb these slopes to find,
This register of weathers, settings, names,
These characters of writing and the soil,
This long disturbed humane geography:

Linked kingdoms of Linnaeus, Audubon,
Of Indian rememberers whose words,
Not taken down, died out with tribe and tongue,
Lost chronicles and catalogues of air.

We look upon a most elaborate map,
Topographies of likened type and trope,
Locations graded, razed, in high relief,
Akin to synonyms and boundary stones.

There, walls are thin as souls who slip back through
On limpid winds that wake the moaning gourd,
Green shrouded yeomen raised on ruined estates,
Unveiling in the veiled and grainy rain.

And scattered all about are thickets, glades,
Places we watch and listen in, like bucks,
Quick-eyed, quick-eared beside the honey-holes,
Alert for a bow-and-arrow’s thwish and whoosh.

These ways—both long forgotten, never known—
Still burn with signs that lead to house and home,
Interpretations latent in the blaze,
Configured in the circumpolar fires.

And there the Centaur draws his arc of stars,
Corded by night, the limb-tips bending in,
The flaming shaft aimed at the Scorpion’s heart
For killing Orion who would kill The Deer;

Or else, the satyr Crotus—sired by Pan
On Eupheme (who nursed the Muses too)—
Crotus who armed the archer, found the beat,
The plucking of the bowstring and the lyre.

And this is where the web of space-and-time
Floating like cosmic gossamer grows thin,
Diaphanous with paths that come and go,
The warp and woof of everything that is.

And to that end we walk, by slope and floor,
From crest to crest in these old northern hills,
This given world we take to heart to know,
A metaphor that carries us across

Each way on Charon’s boat, ferrying the Red—
Its stellar depths in open camouflage—
Toward ghostly choruses, grand antiphons,
Gray wraiths of the porter’s gate and gateless shore,

Whose singing must keep time in keeping with
Old solos of the scales of air and ground,
Concealing and revealing unaware,
Prophetic in the martyred light and dark.