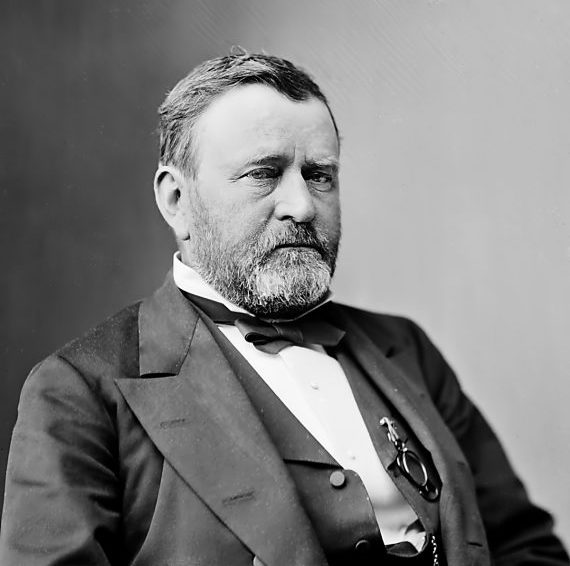 A recent article in the politically conservative National Review about Ulysses Grant’s presidency by historian Allen Guelzo is merely another example of unjustified claims that he was a virtuous champion of black civil rights. To be sure, Grant promoted Southern black suffrage but that was because he knew they were nearly certain to vote for him and his Republican Party. In fact, during his first presidential election in 1868 he received only a minority of America’s white votes despite his status as a Civil War hero. His popular vote margin of 53% to 47% resulted entirely from Southern black votes. That’s why the 1868 Republican Party platform demanded universal black suffrage in the former Confederate states but left it in the Northern states as a state’s right where it had been since the original 1789 Constitution.

Although Grant had a seemingly decisive 214 to 80 electoral vote margin, that also hinged upon the ex-slave vote and voting rights provisions biased against white Southerners. In combination with disfranchisement of former Confederates in Tennessee, Missouri, and West Virginia, Freedmen gave Grant 67 of his 214 electoral votes. Without those 67 votes, the 1868 election would have resulted in tie in the electoral college. Professor Guelzo makes no mention of such points. Nor does he mention that the Republican-controlled Congress would not allow Virginia, Mississippi, and Texas to vote that year because those states had not yet installed Republican vassal regimes.

Grant showed his true colors on black suffrage in 1875 when he repeatedly declined requests by the state’s Carpetbag governor to send troops into Mississippi to “supervise” state elections that year. His true reasons for declining would not be known by the public for nearly forty years when former Republican and black Mississippi Congressman John Lynch revealed that Grant confessed to him in November 1875 that Ohio politicians told the President that such intervention would likely cause Republicans to lose the autumn Ohio elections. When Grant had intervened a year earlier in Louisiana’s elections, Ohio’s legislature was alarmed at his tendency to increase federal power and condemned the military “invasion” of the Pelican State. Basically, Grant traded a Republican victory in Mississippi for one in Ohio. Thus, he abandoned Mississippi’s predominantly black Republicans in favor of the predominantly white Ohio Republicans.

Guelzo has but few comments about the corruption in Grant’s Administration that would make Hunter Biden look like an amateur. One example concerns the abrupt dismissal of Attorney General Amos Akerman, a former Confederate who did more than anyone to bring the Ku Klux Klan to heel. Guelzo states that Akerman lost his post because he stepped on the toes of powerful cabinet members such as State Secretary Hamilton Fish. He ignores the corrupt influence of the railroad industry, which was a dominant power during the Gilded Age. Land grants to such companies totaled acreage that amounted to twice the size of the state of California.

Shortly before resigning Akerman confronted the previous attorney general, Ebenezer Hoar, when the latter was representing a railroad client’s land grant claims. Akerman told Hoar that the client had not completed the work required to qualify for the grants. Nearly simultaneously Interior Secretary Columbus Delano complained to President Grant that Akerman had annoyed railroad moguls Collis Huntington and Jay Gould with rulings unfavorable to their interests. Whether at the urging of Fish, Delano, or Hoar, Grant replaced Akerman with Oregonian George Williams who later resigned under bribery accusations, as did Delano. The New York World reported in January 1872 that Williams’s appointment was essentially a triumph for the Pacific Railroads.

Finally, when the U.S. economy went into depression early in his second term, President Grant schemed to get civilian access to gold rumored to be in the Sioux Indian reservations of the South Dakota’s Black Hills. He deliberately provoked a war with the tribes that resulted in the slaughter of Lieutenant Colonel George Armstrong Custer and his battalion of the Seventh Cavalry Regiment at the Battle of the Little Big Horn in June 1876. Three months later Grant’s Indian agent, George Manypenny, told the Sioux that had remained peacefully on the reservation that they would lose their rations, be compelled to give up their firearms, and be moved to present day Oklahoma if they did not give up their rights to the Black Hills. Congress approved the resulting “Manypenny Agreement” in February 1877.

Sioux descendants litigated the settlement well into the twentieth century. Finally, in 1980 the U. S Supreme Court awarded eight Sioux tribes $106 million in compensation for “a taking of tribal property,” but the tribes refused it. The money has since remained in escrow. Prior to the Supreme Court ruling, a lower court judge wrote in 1975 of “President Grant’s duplicity” and the Manypenny Agreement: “A more ripe and rank case of dishonorable dealing will never, in all probability, be found in our history.”