Most modern historians give the post Civil War Republican Party a free pass on racism. They generally presume that the Party’s demand for black suffrage and civil rights in the South was motivated by the intrinsic morality of racial equality and pejoratively contrast it with the violent resistance such policies sometimes encountered from the region’s whites.

Earlier historians, however, more often explained that the Party also had a second agenda. Specifically, Republicans realized that they could lose control in Washington if the Southern states re-entered the Union without a significant Republican voting block, which almost certainly would have happened if whites dominated the Southern electorate. Continued Republican control, therefore, required two federally imposed actions. First, was to create a Republican-loyal constituency out of the freed slaves, which accounted for 40% of the former Confederacy’s population. Second, was to shrink the South’s opposition electorate by denying voting rights to many former Confederates.

The impact was almost immediate. In the 1868 presidential election Ulysses Grant would have lost the popular majority without Southern black votes. He would, however, have retained his Electoral College victory.

Current historians also applaud Reconstruction Era Republicans for creating and using federal powers against the “White Terrorists” who intimidated and sometimes killed black and Republican Southern voters. They neglect, however, to mention that the Republicans failed to use those same powers to protect other racial minorities that were not solidly Republican. In fact, the Republican-sponsored 1866 Civil Rights Act and the three constitutional amendments of the era mostly ignored “non-white” American residents who were not black. One of the most abused among such groups were the Chinese-Americans.

Two thirds of the lynching victims in California between 1850 and 1900 were Asians. The biggest such episode occurred in Los Angeles in 1871 when nineteen were lynched, including one woman. While modern biographers applaud President Grant for enforcing the 1871 Ku Klux Klan Act in the South, they neglect to mention that his Administration failed to apply the Act to the Los Angeles lynching where the bad guys were white Californians. That’s different, see?

Another incident occurred in Eureka, California fourteen years later. After a white man was killed in the crossfire between two quarrelling Chinese in 1885, the city forcibly removed all of its Chinese residents in 48 hours. Over 300 were hurriedly loaded onto two ships that happened to be in the harbor and told never to return. There can be little doubt that massive bloodshed would have resulted if the Asian immigrants had resisted. When the Chinese-Americans sued for damages in 1886 the California Federal Circuit Court ruled in Wing Hing v. City of Eureka that the Asians were not entitled to any recompense because tax records showed the small amount of property that they owned was “probably worthless.” Nearly all of them were renters because the whites of Eureka refused to sell them real estate.

Although there were far fewer lynching in California than in the South, the number of Chinese-Americans in the state never topped 10% and few were permitted to vote until well into the twentieth century. In fact, they could not become naturalized citizens until 1943 when a bill sponsored by a Southern Democrat in the Senate became law. It is horrifying to imagine the amplification of White Terror against Chinese-Americans that might have resulted in California if the Asian immigrants had been permitted to vote and they represented as large a share of the population as the 40% that blacks did in the South.

The 1870 Naturalization Act is another example of how the infant-GOP deliberately excluded civil rights to racial minorities that were not part of the Republican-loyal Southern African-American voting block. The Act guaranteed blacks the right to become naturalized citizens and, as such, to own property. If it had included other “non-white” immigrants many of Eureka’s Chinese-Americans could have been property owners. The 1870 Act was sponsored by two New York Republicans, in the Senate and House respectively. It passed 33-to-8 in the Senate and 132-to-53 in the House and was signed by President Grant. In 1878 a California Federal Circuit Court specifically ruled in In re Ah Yup that Chinese Americans could not become naturalized citizens.

Since Californians recognized that the Fourteenth Amendment would automatically bestow citizenship on the offspring of Chinese-Americans born in the USA, they took three actions to minimize such possibilities.

First, they persuaded Congress to pass the 1875 Page Act that basically blocked Chinese women from immigrating at a time when the great majority of Chinese in America were males. Second, in 1905 California passed a miscegenation law, which prevented Chinese and white intermarriage. Third, despite the results of the Civil War the state’s Supreme Court ruled in People v. Brady (40 Cal. 198 – 1870) that the Fourteenth Amendment did not apply to California because it was a “sovereign state.” California basically nullified, with impunity, a part of the U. S. Constitution that it did not like. 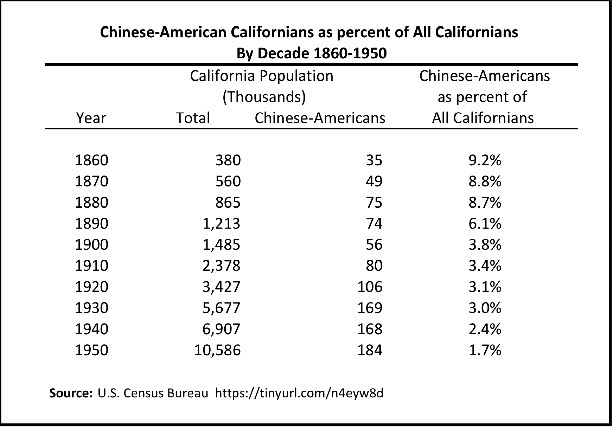 Next came a series of federal Chinese Exclusion Acts designed to reduce the number of Asian residents. The first, in 1882, stopped Chinese immigration for a decade. Seven years later the Republican-dominated U. S. Supreme Court ruled that it was constitutional. The 1892 Geary Act extended the exclusion for another decade. In 1904 the exclusion acts were made permanent. In 1925 even the Chinese wives of American citizens were denied entry into the United States. As the accompanying table illustrates, the Exclusion Acts sharply reduced the growth of Chinese-Americans, which as late as 1950 represented less than 2% of California’s population.

There is, however, no denying that much of the hostility toward Chinese-Americans came from the white laboring classes of the Democratic Party that competed for employment with the Asian immigrants. Thus, the Democratic Party platforms during the presidential elections of 1876, 1880, 1884, 1888, and 1892 contained planks supporting limits on Chinese immigration. Nonetheless, the Republican Party platforms of 1882, 1884, and 1888 also included planks supporting Chinese immigration limits.

The key difference is that the GOP hypocritically limited its concern for minority suffrage and civil rights to Republican-loyal black voters and largely ignored the plight of other “non-white” minorities. As a result, it is difficult to conclude that Republicans were genuinely interested in minority rights, except for the solitary minority that would help keep the Party in power. Such a conclusion changes the complexion of the currently dominant Reconstruction interpretation that white washes Republican Party self-interest.

Philip Leigh is the author of five books on the War, including the recently released Southern Reconstruction.