Postwar Southern reconstruction became corrupted when congressional Republicans took charge of it with the March 1867 Reconstruction Acts, almost two years after President Abraham Lincoln’s assassination. Prior to that, the process began in December 1863, while the war was still in progress. After Lincoln died and Andrew Johnson advanced to the presidency, Johnson tried to continue with a “Presidential Reconstruction Plan.” Johnson granted amnesty to ordinary Confederates who would take a new Union loyalty oath, which would immunize them to charges of treason and enable them to own property. Wealthy Southerners and Confederate leaders, however, were required to petition directly to the President for amnesty on a case-by-case basis. To be readmitted to the Union the former Confederate states were required to outlaw slavery, repudiate their Civil War debts, and rescind their secession ordinances. All complied, but Congress would not seat their elected representatives.

Radical Congressional Republicans began the take-over the process early in 1866 when they gained a veto proof majority early that year. During the ensuing year they wrote the Fourteenth Amendment and prepared the Reconstruction Acts. The Acts required martial law in the Southern states until they were readmitted to the Union under terms satisfactory to Congress. Those terms would require universal black male suffrage in all former Confederate—but not Northern—states and the disfranchisement of selected Confederate leaders. The Radicals intended to use the black vote to create puppet regimes in the South to ensure that the infant GOP retained control of the Federal Government after the Southern states were readmitted.

Once the Federal process was completed, blacks composed most of the voters in five of the eleven former Confederate states: Mississippi, South Carolina, Louisiana, Florida, and Alabama. They comprised half of Georgia’s voters, which would enable a small number of white Carpetbaggers to control the state by unifying with blacks. The problem for Republicans was that whites still held majorities in the remaining former Confederate states, mostly in the upper South. And that’s where the chicanery gets convoluted. Republicans gained control of the remaining Southern states differently, but here’s how they did it in Arkansas. 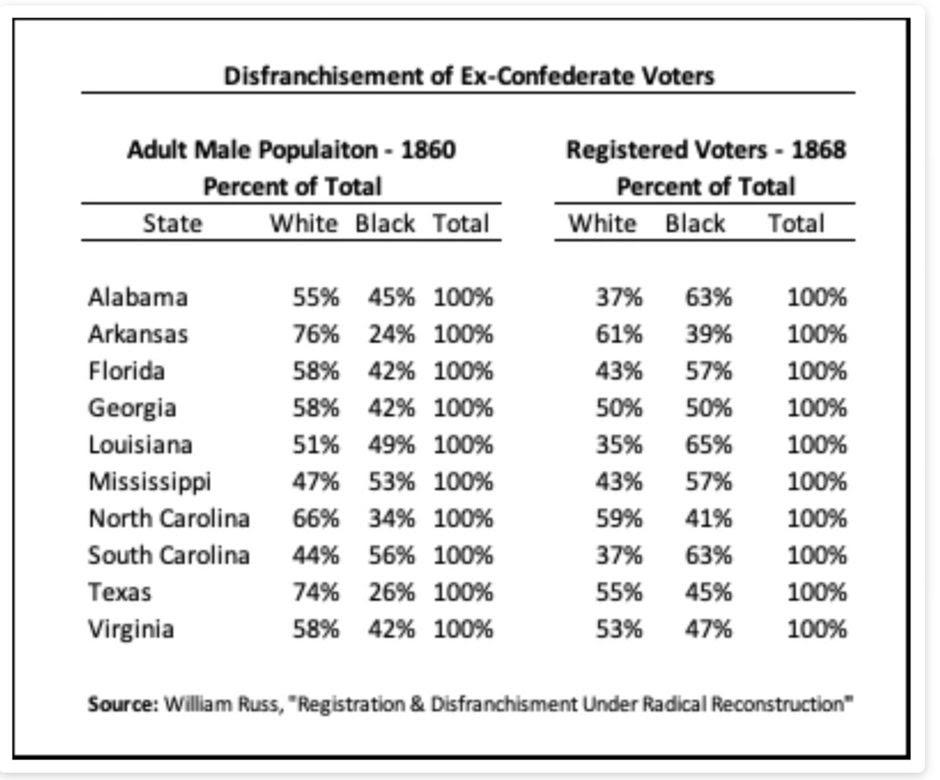 First, when the state’s 1868 Carpetbag Constitution was put to a vote for ratification, the vote outcome was arbitrarily decided by General G. H. Smith. He was the sub-district commander and basically a dictator under martial law. Although the tallies favoring the Constitution were clearly fraudulent, Smith ruled that they were valid. When the opposition showed that the number of votes in the most populous county exceeded the number of voters by 20%, Smith ignored the complaint. That county voted five-to-one in favor of the vassal constitution.

Second, after Carpetbagger Powell Clayton was inaugurated governor in July 1868 his legislature passed a sneaky provision requiring that all Confederates who took Johnson’s postbellum allegiance oath to the Union prove that they did not break the oath after the war had ended. The act stipulated only two practical ways an oath taker could show that he complied with the oath. One was to show that he had openly advocated for Congressional—not Johnson’s or Lincoln’s—reconstruction. The other was to provide compelling evidence that he voted for Arkansas’s 1868 Carpetbag constitution.

Since Arkansas’s radical reconstruction ended by 1876, the number of ex-Confederates disfranchised by Clayton and the 1868 Republican Congress can be estimated by comparing the number of votes in 1868—when only Carpetbaggers, Scallywags, and blacks could vote—to the number in 1876 when all adult males could vote. Forty-one thousand Arkansans voted in 1868 as compared to 95,000 in 1876. The difference of 54,000 suggests that about 57% of former Confederate Arkansans were disfranchised. A similar calculation shows that the abuse in Tennessee was even worse.