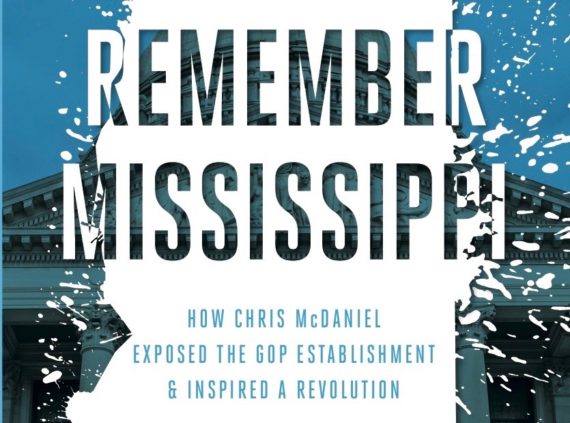 A review of Remember Mississippi: How Chris McDaniel Exposed the GOP Establishment and Inspired a Revolution (WND, 2017) by Ryan S. Walters.

Ryan S. Walters, who is book review editor for Abbeville Institute and editor of Mississippi Conservative Daily, has produced a highly readable biography of his close friend, Chris McDaniel. For those who may not remember, McDaniel is the lawyer from Jones County, Mississippi who challenged Thad Cochran for the US Senate seat in the Republican primary in 2014.  For me this biography was an eye-opener for reasons that might interest readers of this website. On the basis of the national news coverage of the Mississippi primary and the campaign waged by Cochran, I believed at the time that McDaniel sprang from the far Right. Since Cochran and the RNC depicted McDaniel as an unreconstructed Southern reactionary, I concluded that he must have been politically if not behaviorally a younger version of Judge Roy Moore. Being a notorious reactionary myself, I didn’t hold this against McDaniel, but it seemed to me that there must have been at least some fire, given all the smoke that enveloped Cochran’s opponent.

From Walters’ biography it’s clear that I was mistaken in my judgment. McDaniel is shown to be an earnest libertarian-Republican, who ran against Cochran because he properly viewed this establishment relic with embarrassment. Cochran waged against McDaniel one of the sleaziest campaigns at least in my memory, trying to enlist black Democrats who had already voted in some cases in the Democratic primary, to vote illegally a second time. The RNC helped Cochran engage in these shenanigans, while depicting the hapless McDaniel as a full-blown segregationist. This vilification targeted a well-meaning idealist and devout Christian, who from what I can tell never raised racial issues, except to criticize Cochran’s tactics in recruiting ineligible black voters.

In reading descriptions of this doughty figure, I was struck by how little McDaniel, although a Southerner and self-described conservative, identifies with the Lost Cause. Rather he stresses his roots in Jones County, the anti-slavery region in Southeastern Mississippi that tried to secede from the Confederacy. McDaniel ascribes his political conversion to listening with his father to a speech given by Ronald Reagan in 1984, in which the theme was American values. Like many of today’s mainstream conservative celebrities, McDaniel associates his political awakening to the example and oratory of Ronald Reagan. It was by being bloodied in his uneven struggle against Cochran, who is now serving his seventh term in the US Senate, that McDaniel earned national recognition among conservative Republicans. The National Conservative Union selected him as Conservative of the Year in 2015 for his fight for “conservative values.”

In his conclusion, Walters stresses the likely connection between Trump’s election and McDaniel’s defeat. The GOP establishment in Mississippi, led by Haley Barbour and Cochran, avenged itself one more time on McDaniel by backing an eighty-year old liberal Democrat for a state senate seat against the incumbent, who had been McDaniel’s campaign manager. According to Walters, this provided further evidence of how the Republican establishment treated challengers from the Right; and its shocking revenge against a member of McDaniel’s staff strengthened a grassroots rebellion which may have contributed to the surprise election of Donald Trump in 2016. Although this connection may not be as direct as Walters asserts, (I’m not sure that McDaniel’s libertarianism translates easily into Trump’s populism), some link between these developments is conceivable. Revulsion for a corrupt establishment could lead in multiple directions; and so the pent-up anger against the RNC generated by McDaniel’s fate may well have fueled another rebellion from a different Right.