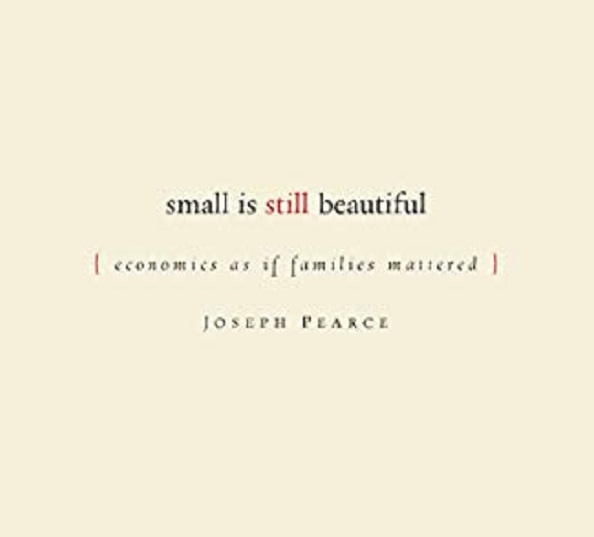 A review of Small Is Still Beautiful: Economics as if Families Mattered (ISI Books, 2006) by Joseph Pearce.

There’s not too much that’s actually wrong about this book, other than it proves itself totally unnecessary.

Obviously from the title you know that it is based on Fritz Schumacher’s great classic of 1973, and it does a lot of quoting from that book and other Schumacher writings.  But it came out in 2006 with an emphasis on the “still” and it simply fails to provide any strong evidence for the triumph of smallness in the intervening 33 years.  In fact it doesn’t even really try to.  It is simply a rehash of Schumacher’s wisdom in prose that does not come anywhere near matching that of the master nor with any of that subtle humor for which he was noted.

Pearce, it says on the jacket, has written biographies of Belloc, Wilde, Solzhenitsyn, and others, and is a teacher of literature at a Catholic university that was funded by the founder of Domino’s Pizza. Alas, that does not qualify him for the task he has undertaken, which he abundantly demonstrates.  He is good-hearted, and I suspect well-meaning, but he might better have turned to writing a biography of Schumacher rather than trying to update him.

Of course small is still beautiful, ever more obvious as our modern out-of-hand technology drives the earth toward its overheating crisis—a phenomenon that incidentally Pearce seems to be unaware of.  It is the sheer size of the apparatus that the internet has spawned, and its ever-swifter and ever-more-widespread effects, that has led the earth to this precipice, in the process burying the genius of smallness under its detritus.

From my perspective, the only causes worth undertaking and fighting for have been the lost ones: against nuclear power, against wars, against giantism, for environmental protection, for decentralization, for bioregions, for reverence for life, all life.  The cause that Schumacher gave his life to, teaching the wisdom of smallness, has similarly been lost and this book does nothing to resurrect it.