The South is and always been conservative. But with the constant hammer of political correctness and political falsehood (redundant?) pounded on it, it has waffled among many who brand it as evil. Punchy from the blows, it has sought to defend itself in the wrong places: In presentism and with Republicans.

Republican and Air Force veteran Mike Hill, the first black elected to state office in the Florida panhandle since the War Between the States, has introduced a bill that would protect all monuments: “The Soldiers’ and Heroes’ Monuments and Memorials Protection Act.”

Naturally, the long knives of presentism and erroneous historical scholarship immediately race to cut Hill’s throat. Newsweek in capturing the story compares Hill to VA Secretary Robert Wllkie, who had previously called Jefferson Davis, among other superlatives, a statesman and a martyr to “The Lost Cause.”

Newsweek wrote: “Wilkie has longstanding links to the neo-Confederate movement, which seeks to cast the Confederacy in a heroic light and downplays its defense of racism and slavery.”

Why didn’t Tom Porter (Newsweek) have the intellectual acumen to mention New England’s defense of racism, slave-trading, and kidnapping? My guess is Porter is a product of public education.

In any event, I have seen no complementary articles on such historical matters as the Massachusetts Puritans making slavery legal, or Peter Faneuil’s family who built the famous (perhaps infamous?) Faneuil Hall with a fortune made in the slave trade. Certainly, no rallies to tear it down because it is a racist monument.

Nor have I seen articles addressing the racist Ivy League Brown University. After all the Brown family ran one of the more vicious and profitable slave-trading businesses in New England.

Why not rename Brown University to some contemporary feel-good-ism like Michele Obama Equality U. or some such silliness? That would at least be consistent.

This business of remembering the past by calling it the present works for the presentism bigots, whether they be on the left or right, North or South. It is almost sickening to try and fathom the twisted and misunderstood history lessons of the likes of Mark Levine, Sean Hannity or Jonah Goldberg, to name only three who seduce even Southern conservatives with their misguided narratives and then call themselves “conservatives.”

Many Southerners in an effort to gain political ground due to having had to bear the brunt of attacks and name-calling as Jim Crow(ers) and racists have equivocated. They have, as conservative people, been duped into believing that the holy grail of conservatism was the Republican party and Barry Goldwater. Even Ronald Reagan was seduced and ultimately joined the disguised conservatives (Neocons) of Dick Cheney, Bob Bennett, and the Bush bunch et al.

It all started in 1981 when M.E. Bradford was selected by Ronald Reagan as Chairman of the National Endowment for the Humanities. He had the support of no less prominent conservatives than Russel Kirk and Forrest McDonald. But, he had the disdain for Southerners by Neocons such as Norman Podhoretz and William Kristol. Neocon Bob Bennett was selected after Reagan caved.

This was when Southerners, with their conservative views and beliefs, were hoodwinked into being ashamed of who they are because the neocons said so.

It’s perhaps ironic that a Yankee, Donald Trump, is now battling for some semblance of a former united union of states—not a national government, but unless the Southern conservatives remember their own history and the truth about it, Trump will fight a losing battle.

As to Jim Crow, that’s a Northern invention. Just ask C. Van Woodward. And you can bet Mike Hill will be castigated as Florida’s Uncle Tom. 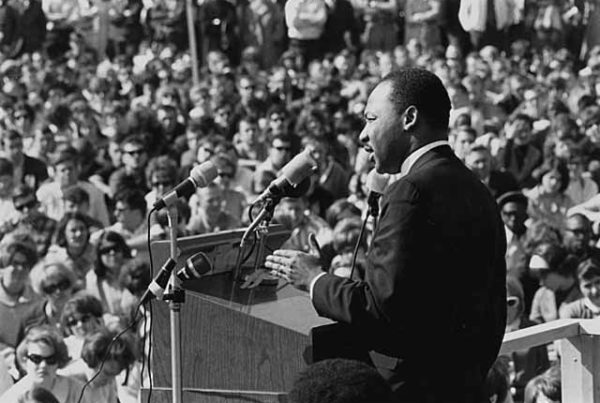