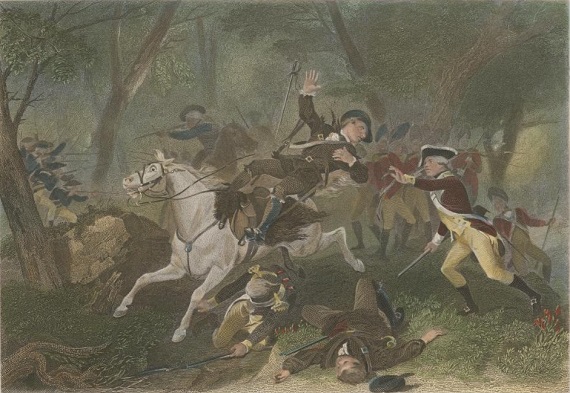 By Clyde WilsonApril 30, 2020Blog
No Comments

The Battle of King’s Mountain

‘T was on a pleasant mountain
The Tory heathens lay,
With a doughty major at their head,
One Forguson, they say.

Cornwallis had detach’d him
A-thieving for to go,
And catch the Carolina men,
Or bring the rebels low.

The scamp had rang’d the country
In search of royal aid,
And with his owls, perched on high,
He taught them all his trade.

But ah! that fatal morning,
When Shelby brave drew near!
‘T is certainly a warning
That  ministers should hear.

And Campbell, and Cleveland,
And Colonel Sevier,
Each with a band of gallant men,
To Forguson appear.
Just as the sun was setting
Behind the western hills,
Just then our trusty rifles sent
A dose of leaden pills.

Up, up the steep together
Brave Williams led his troop,
And join’d by Winston, bold and true,
Disturb’d the Tory coop.

The royal slaves, the royal owls,
Flew high on every hand;
But soon they settled — gave a howl,
And quarter’d to Cleveland.

I would not tell the number
Of  Tories slain that day,
But surely it is certain
That none did run away.

For all that were a-living,
Were happy to give up;
So let us make thanksgiving,
And pass the bright tin-cup.

To all the brave regiments,
Let’s toast ’em for their health,
And may our good country
Have quietude and wealth.