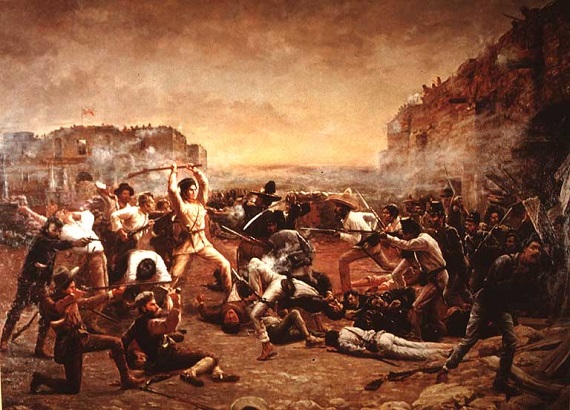 By Clyde WilsonJune 11, 2020Blog
No Comments

EDWARD COOTE PINKNEY (1802-1828) of Maryland was born and partly raised in England where his father, William Pinkney, was the U.S. Minister.  After publishing a good deal of poetry, he attempted to join the Mexican Navy during that country’s war of independence. From this venture Pinkney returned home to Baltimore, his health shattered.  He continued to write prolifically well-regarded verse until his death at 27.  Pinkney’s grave is located near Sidney Lanier’s in Baltimore.

Why is that graceful female here

With yon red hunter of the deer?

Of gentle mien and shape, she seems

Yet with the stately savage walks

As she were of his kind.

Look on her leafy diadem,

Enriched with many a floral gem:

Those simple ornaments about

But not a flower lies breathing there,

Sweet as herself, or half so fair.

Exchanging lustre with the sun,

A part of day she strays—

On nature’s face she plays.

Can none instruct me what are these

Companions of the lofty trees?—

Intent to blend with his her lot,

Fate formed her all that he was not;

And, as by mere unlikeness thoughts

Their hearts from very difference caught

The household goddess here to be

Of that one dusky votary—

She left her pallid countrymen,

An earthling most divine.

And sought in this sequestered wood

Behold them roaming hand in hand,

Observe their movements:—he for her

While she assumes a bolder gait

To ramble at his side:

Thus, even as the steps they frame,

Their souls fast alter to the same.

The one forsakes ferocity,

The other tempers more and more

The artful with the wild.

She humanizes him, and he

Educates her to liberty.

Oh, say not they must soon be old,

Yet envy I that sylvan pair,

More than my words express,

The singular beauty of their lot,

The painful pleasures of despair:

Their sun declines not in the sky,

Nor are their wishes cast,

Repining towards the past:

With naught to dread, or to repent,

In solitude there is no crime;

Their actions are all free,

And passion lends their way of life

And how should they have any cares

Whose interest contends with theirs?—

The world, or all they know of it,

Is theirs:—for them the stars are lit;

For them the earth beneath is green,

The heavens above are bright;

For them the moon doth wax and wane,

And decorate the night;

For them the branches of those trees

Wave musick in the vernal breeze;

For them upon that dancing spray

The free bird sits and sings,

And glitt’ring insects flit about

For them that brook, the brakes among,

Murmurs its small and drowsy song;

For them the many coloured clouds

Th’ expression of the sky.

For them, and by them, all is gay,

And fresh and beautiful as they:

The images their minds receive,

The glory of their state.

Could aught be painted otherwise

Than fair, seen through her star-bright eyes?

He too, because she fills his sight,

The pleasure that he has in her,

Makes all things seem to please.

And this is love;—and it is life

They lead, that Indian and his wife.

And is it gone, that venerable tree,

The old spectator of my infancy!—

It used to stand upon this very spot,

And now almost its absence is forgot.

I knew its mighty strength had known decay,

But dreamt not that its frame would fall, ere mine

At all partook my weary soul’s decline.

The great reformist, that each day removes

The old, yet never on the old improves

As sport or spleen may prompt, his ancient toys,

And shapes their ruins into something new—

Has planted other playthings where it grew.

The wind pursues an unobstructed course,

Which once among its leaves delayed perforce;

The harmless Hamadryad, that, of yore,

Inhabited its bole, subsists no more;

Its roots have long since felt the ruthless plow—

There is no vestige of its glories now!

But in my mind, which doth not soon forget,

That venerable tree is growing yet;

Nourished, like those wild plants that feed on air,

By thoughts of years unconversant with care,

And visions such as pass ere man grows wholly

A fiendish thing, or mischief adds to folly.

I still behold it with my fancy’s eye,

A vernant record of the days gone by:

I see not the sweet form and face more plain,

Whose memory was a weight upon my brain.

—Dear to my song, and dearer to my soul,

Who knew but half my heart, yet had the whole

Sun of my life, whose presence and whose flight

Must this delightless verse, which is indeed

The mere wild product of a worthless weed,

Towards the lost light, and scorns its birth and place,)

End with such cold allusion unto you,

To whom, in youth, my very dreams were true?

It must; I have no more of that soft kind,

*My age is not the same, nor is my mind.

Last Message from the Alamo

FELLOW-CITIZENS AND COMPATRIOTS:  I am besieged by a thousand or more of the Mexicans under Santa  Anna.  I have sustained a continued  bombardment for twenty-four hours, and have not lost a man.  The enemy  have demanded a surrender at discretion; otherwise the garrison is to be  put to the sword, if the place is taken. I have answered the summons with a cannon-shot, and our flag still waves proudly from the walls. I shall never surrender or retreat. Then I call on you in the name of liberty, of patriotism, and of everything dear to the American character to come to our aid with all dispatch. The enemy are receiving reinforcements daily, and will no doubt increase to three or four thousand in four or five days. Though this call may be neglected, I am determined to sustain myself as long as possible, and die like a soldier who never forgets what is due to his own honour and that of his country. Victory or death!

Original Memorial Inscription at the Alamo

To the God of the Fearless and Free is dedicated this Altar made  from the Ruins of the Alamo.

Thermopylae had her Messenger of Defeat, but the Alamo had none.

Be they enrolled with Leonidas in the Host of the Mighty

Blood of Heroes hath stained me, let the Stones of the Alamo speak that their Immolation be not forgotten.

STARK YOUNG (1881—1963) of Mississippi is best known as one of the Twelve Southerners of the manifesto I’ll Take My Stand, for his novel So Red the Rose, and for his drama criticism. He wrote this tribute to Southern history early in his career.

Is then Thermopylae come from the shade

Of  ancient death and grand oblivion?

On, fail not God and Texas! They have made

The wall—hold  then your church and carronade.

The loop-holes flame, the aqueducts will run

Crimson with blood—ye fight a score with one.

The smoke dies down,  your glory cannot fade.

The rising sun finds death and silence there.

Beside the wall Travis lies slain, and nigh

The chapel glorious Crockett, fallen among

The hostile carnage and our few. Hear,

O Mexico! This is no victory,

For from these veins are wells of  freedom sprung!