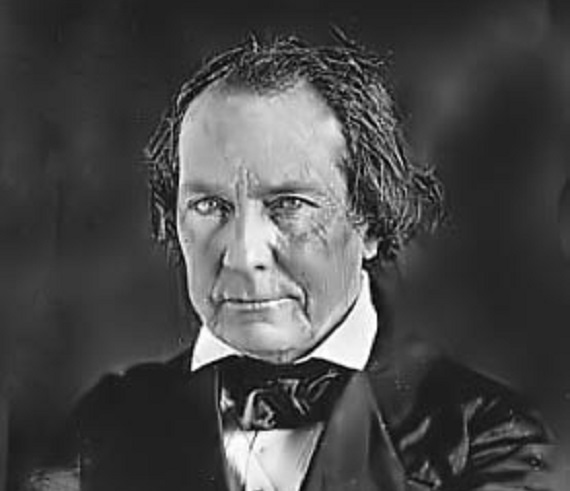 By Clyde WilsonAugust 13, 2020Blog
No Comments

MIRABEAU BUONAPARTE LAMAR (1798-1859) of Texas moved from his native Georgia to the Texas Republic in 1835. He took a conspicuous part in the Texas War of Independence and was cited by Sam Houston for outstanding bravery at the Battle of San Jacinto. Lamar served in the Texas government and followed Houston as President. He was also a prolific poet. His verses were often addressed to or about ladies—his mother, sister, daughter, or others he admired. His work gives something of a hint of the mind of the early Southern settlers of Texas.

The Daughter of Mendoza

O lend to me, sweet nightingale,
⁠Your music by the fountains,
And lend to me your cadences,
⁠O river of the mountains!
That I may sing my gay brunette,
A diamond spark in coral set,
Gem for a prince’s coronet—
⁠The daughter of Mendoza.

How brilliant is the morning star!
⁠The evening star, how tender!
The light of both is in her eye,
⁠Their softness and their splendor.
But for the lash that shades their light
They were too dazzling for the sight;
And when she shuts them, all is night—
⁠The daughter of Mendoza.

O! ever bright and beauteous one,
⁠Bewildering and beguiling,
The lute is in thy silvery tones,
⁠The rainbow in thy smiling.
And thine is, too, o’er hill and dell,
The bounding of the young gazelle,
The arrow’s flight and ocean’s swell—
⁠Sweet daughter of Mendoza!

What though, perchance, we meet no more—
⁠What though too soon we sever?
Thy form will float like emerald light,
⁠Before my vision ever.

For who can see and then forget
The glories of my gay brunette?
Thou art too bright a star to set—
⁠Sweet daughter of Mendoza!

Oh, Do Not Ask Me Now For Rhyme.

To My Daughter, Rebecca Ann.

OH, do not ask me now for rhyme,
For I am lonely-hearted;
And lost are all the dear delights
The Muses once imparted.
I sigh no more for Hybla’s dews,
Nor Helicon’s bright water;
I only crave a sable wave
Of Lethe’s stream, my Daughter.

And wouldst thou share thy father’s woes,
Partake his bitter weeping?
Then seek with him you valley’s shade,
Where beauty’s wreck is sleeping;
For in that dark and lonely place —
Death’s solemn, silent quarter —
Was laid the pride of all her sex,
The mother of my Daughter.

She was all bright and beautiful,
A floating star before me,
Whose lustre was my guiding light,
For ever shining o’er me;
So much of heaven in all her ways,
How often have I thought her
Some angel sent us from the skies,
To bless this earth, my Daughter!

It was from her alone I drew
My minstrel inspiration;
But when she died and left me here —
My soul in desolation —
I broke the shell she loved so well,
Destroyed the songs I wrought her;
Nor can my voice again rejoice
In cheerful strains, my Daughter.

Then name some other boon, my child; —
Thou know’st I can deny thee
No gift thine innocence demands,
While thou art smiling by me:

But should I dare re-string the harp
By Chattahoochee’s water,
The bitter tears of other years
Would flow afresh, my Daughter.

Soldier of the Cross.

Inscribed to the Pioneer Preacher of Texas.

NAY — tell me not of dangers dire
That lie in duty’s path;
A Warrior of the Cross can feel
No fear of human wrath.
Where’er the Prince of Darkness holds
His earthly reign abhorred,
Sword of the Spirit! thee I draw,
And battle for the Lord.

I go, I go to break the chains
That bind the erring mind,
And give the freedom that I feel,
To all of human kind;
But oh, I wear no burnished steel,
And seek no gory field;
My weapon is the Word of God,
His promise is my shield.

And thus equipped, why need I fear,
Though hosts around me rise? —
There is a power in gospel truth
No heathen can despise;
And he who boldly fights with that,
Will through more perils wade
Than the vain warrior, trusting to
His bright Damascus blade.

No blasts by land or sea can shake
The purpose of my soul;
The tempest of a thousand winds
May sweep from pole to pole,
Yet still serene, and fixed in faith,
All fear of death I scorn —
I know it is my Father’s work —
He’s with me in the storm.

Then let me go where duty calls,
Where God himself commands —
Bearing the banner of his Son
To dark and distant lands;
And if the high and holy cause
Require my early fall,
A recreant he who would not die
For Him who died for all.

I NEVER hoped in life to claim
A passport to exalted fame;
‘T is not for this I sometimes frame
The simple song —
Contented still, with humble name,
To move along.

I write because there’s joy in rhyme;
It cheers an evening’s idle time;
And though my verse the true sublime
May never reach,
Yet Heaven will never call it crime,
If truth it teach.

The labor steals the heart from wo;
It makes it oft with rapture glow;
And always teaches to forego
Each low desire;
Then why on those our blame bestow
Who strike the lyre?

If virtue in the song be blent,
I know no reason to repent
My hours of studious content,
And lettered joy;
‘T were well if leisure ne’er was spent
In worse employ.