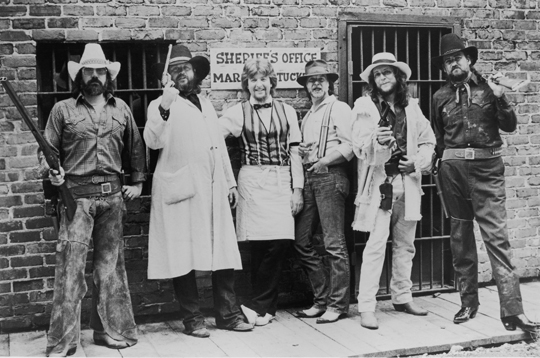 By Brion McClanahanMay 29, 2020Blog
No Comments

This was the biggest hit for the Allman Brothers and it led Lynyrd Skynyrd to Sweet Home Alabama. Every Southern rock outfit wanted to recreate the magic of Ramblin’ Man. The tune was written by Dickey Betts and was one of the last AB songs to feature Berry Oakley on bass.

A decidedly heavier song than this Southern rock band was known for recording, “Homesick” features an edgy guitar riff that gets stuck in your head. The song references the turbulence of the 1960s and 70s in America and a longing for “days bygone.”

Life on the road was tough, and every major Southern rock band offered a tune or two on the difficulty of being far from home. Blackfoot’s “Highway Song” is a haunting tale of misery and loneliness.

Good One Comin On – Blackberry Smoke

Sometimes you need to get away. This song is the perfect Friday tune. From the references to Ray Wylie Hubbard to the nights at the lake, every hard-working American can get behind this song.

I Know A Little – Lynyrd Skynyrd

This “honky tonk” tune allowed Steve Gaines to show off. His energy saved the band, though it was short lived as Gaines perished in the terrible plane crash. This is probably what Skynyrd would have sounded like into the 1980s.

Vicious Cycle was one of the best recent Skynyrd albums, and “That’s How I Like It” has all the ingredients of a good Southern rock tune: great hooks, a sing along chorus, and easily identifiable Southern themes. “Like my women hot and my beer ice cold, real fast cars and my whisky old, like a slow drive down an old dirt road, That’s how I like it.”

Only diehard Marshall Tucker fans will recognize this song, but Doug Gray puts on one of his best vocal performances in this bluesy tune. The Jerry Eubanks’s saxophone intro and solo are top notch, Paul Hornsby provides a mind blowing guest organ solo, and of course Toy Caldwell is brilliant, as usual.

Tom Craine wrote this beautiful tribute to Tennessee and her people. This is the quintessential Southern traditionalist ballad. “We got all we need, We got Tennessee.”

“Prime Time” has a Street Survivors feel to it, and this is the most Skynyrdesque song from the Rossington Collins Band. You can almost hear “You Got That Right” or “I Know A Little.”

Tom Petty may have disowned the Confederate Flag shortly after they started showing up at his shows, but this song is pure Southern defiance. Petty’s original is great, but the Steel Woods do a better job with it. “There’s a Southern accent where I come from, the youngun’s call it country, and the Yankees call it dumb.”

Perhaps one of the best “pop rock” Southern tunes ever written, “Hold On Loosely” is not usually cited as a Southern rock song, but what else could it be? .38 Special sounded as good live as they did on studio recordings, as evidenced by this selection.

Fire in the Dry Grass – Cry of Love

Audley Freed’s acoustic intro alone is worth a listen, but the rest of the song is blistering Southern rock. Grunge killed a portion of the Southern rock revival during the 1990s. Too bad, because this music would have gone mainstream today.

Almost a perfect Southern rock tune, from the slide guitar to the piano and honk tonk rhythm, “Stare it Cold” shows why the Black Crowes led the 1990s Southern rock renaissance.

“Go Faster” was one of the best songs on the Crowes’ album By Your Side and showed that the band had not forgotten how to play Southern rock after their previous album flopped. It didn’t hurt that they hired Audley Freed to play guitar on this album.

The Myth of Love – Georgia Satellites

The Satellites could be called “bar rock” or honky tonk music, but either way, they are distinctively Southern. This jukin’ little tune is perfect for a good time and shows by the Georgia Satellites should be on any must listen to Southern rock list.

This fast-paced tune has great slide guitar and a perfect Southern rock rhythm. It screams 1980s Southern rock, and you can almost hear where the Black Crowes pulled some of their material for “Kickin’ My Heart Around.”

This great little tune by the unknown Van Zant family member has been virtually lost outside of a few dedicated Southern rock fans. It sounds a lot like the Lynyrd Skynyrd of the 1990s and 2000s and has as heavy Molly Hatchet feel. RIP Jimmie Van Zant.

After Danny Joe Brown left Molly Hatchet, he briefly formed his own band and released this song as a single. The 1983 Molly Hatchet song “Fall of the Peacemakers” was absolutely influenced by this tune.

“Jackie Blue” was a big hit for the Ozark Mountain Daredevils and can still be heard on classic rock stations—and in furniture stores—today. It’s not often classified as a Southern rock song, but the groovy slide guitar intro and solo cannot be classified as anything but Southern.

Bill Leverty is better known for his work in the band Firehouse, but his solo work is almost entirely dedicated to the South and Southern culture. This traditional folk/gospel song has been recorded by several acts including Johnny Cash and Elvis Presley. Leverty’s version is fantastic.