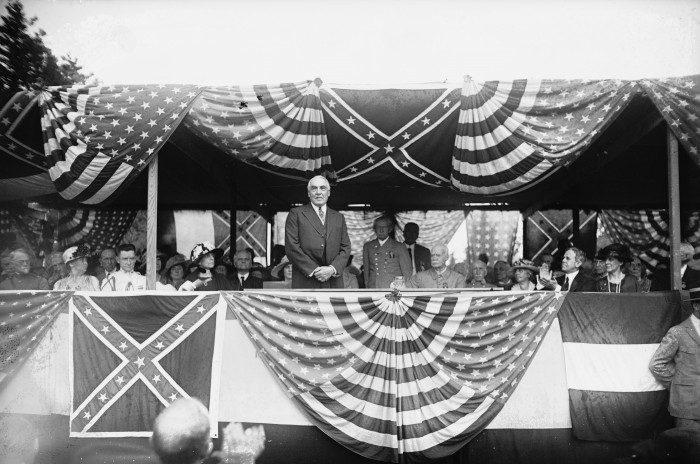 The Confederate Origins of Memorial Day

By Brion McClanahanMay 29, 2017Blog
No Comments Many Americans will pause today to honor the men and women who have given their lives in the United States armed forces. What most probably don’t know is that this holiday originated in the South after the War for Southern Independence. It was originally called “Decoration Day.”

The monuments that these modern day Leninists believe represent “white supremacy” were a byproduct of a movement that began one year after the conclusion of hostilities to remember the over two hundred thousand men who died defending the Southern fight for independence.

It took decades to collect enough pennies to build the monuments that are now being toppled in hours.

Not even the Yankees who faced cannon and rifle fire from these Confederate soldiers were so bold to deny Southerners their memorials. Some, in fact, joined hands at dedication ceremonies across the South. If anyone should have hated Confederate soldiers, it was these men. But they didn’t.

Thousands of Union soldiers saluted their Confederate counterparts as they surrendered at Appomattox and wept with them when these Southern patriots gave up their flags. Not one Union soldier burned a Confederate flag or dragged it through the mud when the War was over. The immediate aftermath was magnanimous on both sides.

Reconstruction created tension, but in subsequent decades as the South sought to be once again an integral part of the Union, and as the vigor of youth gave way to the reflection of old age, these grey headed veterans saluted both sides and honored their dead.

If anyone wants to understand why these monuments were erected, simply read the inscriptions. Not one is dedicated to “white supremacy,” but all honor the Confederate soldier and many the Southern women who supported the cause. Several are dedicated to the “Principles of 1776” and the “Sovereignty of the States,” the same cause Southerners wrote about as they headed off to war in 1861. This is no “Lost Cause” revisionism. That comes from those who disingenuously write that the War began as a moral crusade to end slavery.

The women who held the first “Decoration Day” in Columbus, Georgia in 1866 did so to honor the dozens of Confederate soldiers buried in Linwood Cemetery. This was soon replicated across the South. The Grand Army of the Republic copied the event in 1868, causing another Southern innovation to be coopted by Yankee do-gooders.

American soon honored Confederate dead as part of “Memorial Day” events, including those like President William McKinley who wore the blue.

Southerners eventually decided to hold separate “memorial day” remembrances in April as part of “Confederate Memorial Day.” They wanted as a people to reflect on the cost of war. Their newly gained poverty was a daily reminder, but these wives, brothers, sisters, mothers, fathers, cousins, aunts, uncles, sons, and daughters of fallen heroes still burned with the flame of defiance. They put down their swords but did not concede that their men were “traitors.”

By the 1870s no one north of the Mason Dixon called them that anymore. They were as American as Lincoln. It was not unfashionable well into the late twentieth century–even for the Left–to honor Confederate soldiers as valiant and courageous men. That list includes every American president from Teddy Roosevelt to Bill Clinton.

Taking down monuments or removing Confederate flags would have been as un-American as rooting for the Soviet Union to win the Cold War.

But as Bernie Sanders demonstrated in 2016, being a Soviet stooge makes you a rock star in modern America. Perhaps that is why adopting the Soviet playbook is so easy for both the uneducated and university indoctrinated masses. Confederate memorials represent a roadblock in their crusade to eliminate Western Civilization and rewrite American history.

When all of the Confederate monuments are gone or “contextualized,” where will the Leninists turn next?

If the cultural Marxists want to divest themselves of “Confederate” imagery, then “Memorial Day” would eventually have to go, too.

After all, long after the War for Southern Independence, the Confederate Battle Flag showed up on battle fields from Europe to Asia to the Middle East.

It would be the only “fair” and “equal” thing to do.