The New War on the South’s Patrimony 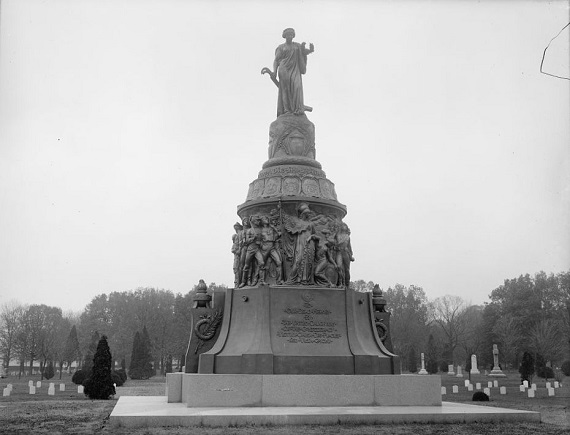 In the news late today, on a nice summery afternoon in early September, I saw live on television a crane removing the large statue of General Robert E. Lee from a park in Dallas. I had to switch channels immediately because I was so upset and fed up with these imbecile journalists bleating the left-wing party line about the nobility of this new war to eradicate the final remnants of the so-called Confederate white supremacy and Southern proto-Nazi racism.

Earlier this year, the great-great-grandsons of Stonewall Jackson wrote a long letter to Slate Magazine, which was republished elsewhere, saying that it was time that their ancestor’s statue be removed from Monument Avenue. They said they were ashamed of the Confederate Cause.

And now Sir Moses Ezekiel, a proud Jewish Confederate and major 19th Century sculptor known throughout Europe, has descendants crying for the removal of his beautiful Confederate memorial from Arlington Cemetery.

I’m a native Washingtonian. What a difference a century makes. I viewed a photograph of the Daughters of the UDC on the day that this Memorial was dedicated. They were there by the hundreds. Two years ago, as a SCV member, I was invited with other members of my camp to attend a joint UDC memorial (DC & Northern Virginia chapters); it was a decent sized group, but far less in numbers than it was in the time of Teddy Roosevelt, and the Daughters were almost all senior in age. I say this with concern and respect. Not enough young Southern women are proud enough of their ancestors to join the UDC and fight for their heritage. We need them! But they’re so brainwashed by their teachers and the oppressive Yankee mainstream culture that dominates our lives–unless we already are in the Resistance and are literate about our Southern culture. I say the same thing about our young Southern men.

Somewhere, recently, I learned that Lee descendants have also joined the cause of their ancestors’ Yankee enemies. Years ago, it was my extreme privilege to host a luncheon and book-signing for the great-granddaughter of Marse Robert through his youngest son, Captain Robert E. Lee Jr CSA. Her grandmother was Captain Lee’s second wife. She was proud of her ancestry but apologised to me and said that she fell in love with a Yankee and married him, but she said he loved her and agreed to re-locate with her to the Lees’ ancestral Tidewater region.

I always had a soft spot for Sir Moses, being a minority Southerner myself, an Asian, and also culturally European–we are both that–minority Southerners, Europeans, and wholeheartedly devoted to the Lost Cause. If I had been around in 1861, I would have joined the Army of Northern Virginia. After the War, provided that I survived, I would have moved to Paris and spend my final years amongst the Post-Impressionists and French Symbolists. I would also proudly hang up my Confederate Battle Flag in my Paris flat.

For watching one of the last 21st century films sympathetic to the Southern Cause, I recommend “Field of Lost Shoes.” Not a great film, but pleasant enough. We Southerners need to support ANY Hollywood produced film that’s pro-Southern–as rare as hen’s teeth nowadays.

It’s about the VMI cadets. Young Moses Ezekiel is one of the principal characters and portrayed with great sympathy as a sensitive artist who was also aware of the racial problem of his time. It’s not by any means politically correct.

The brilliant French political philosopher, Count Alexis de Tocqueville, wrote the most acute study of 19th Century American society, many of whose traits remain with us still. Count de Tocqueville devoted a chapter in his masterpiece, “On Democracy In America”, to the issue of racism and the American Experience.

He observed that white Northerners were far more racist towards blacks than white Southerners. The former had abolished slavery in their states; the latter, which included Delaware, the border states, Indian Territory, and what became the Confederate States of America, maintained slavery. And yet the greatest anti-black racists lived up North.

Back to the film “Field of Lost Shoes”. It shows social matters, albeit lightly, as they were during the War for Southern Independence, and how sensitive, humane young Southerners of education and Southern patriotism, like Moses Ezekiel, and his close friends at VMI, dealt with it.

See people in their time and appreciate them in their time. Learn from them. Of course, being human, they made their mistakes and committed their personal sins. But the Southerners of 1861 was the South’s Greatest Generation. Let us give then the full measure of honour and respect to they who so richly deserved them–the intrepid men and women of Dixie.

Americans are making many mistakes today, indeed grave sins, in renouncing their Western culture. Many want to destroy it entirely. Southern political philosopher Richard Weaver said that the Old South was the last bastion of traditional European culture in America. I certainly would assert that about my beloved French Louisiana.

Sir Moses Ezekiel spent most of his life in Europe and became knighted for his contributions to European art. And yet, he sculpted this noble Confederate monument which stands in Arlington and is buried beside it underneath a simple plaque designating his name and rank in the Confederate Army. There is no mention of his knighthood and European acclaim.