The Truth About Tariffs and the War

During the past thirty years most historians claim that slavery was the dominant cause of the Civil War. They increasingly insist that the South’s opposition to protective tariffs was a minimal factor, even though such tariffs were specifically outlawed in the Confederate constitution. Historian Marc-William Palen, for example, writes:

One of the most egregious of the so-called Lost Cause narratives suggests that it was not slavery, but a protective tariff that sparked the Civil War.

On 2 March 1861, the Morrill Tariff was signed into law by outgoing Democratic President James Buchanan. . . A pernicious lie quickly formed around the tariff’s passage, a lie suggesting that somehow this tariff had caused the US Civil War. By ignoring slavery’s central role in precipitating secession and Civil War, this tariff myth has survived in the United States for more than a century and a half – and needs to be debunked once and for all.

To begin, Palen fails to note that antebellum tariffs accounted for about ninety percent of federal revenues, even though most of his comrades readily conceded the point. Thus, tariff policy was as important to antebellum Americans as federal tax policy is to us today.

Beyond that, Palen falls into three traps that often entangle his fellow woke historians.

First, he equates the causes of Southern secession with the causes of the Civil War, but they are not the same. The North could have let the initial seven cotton states leave in peace as many leaders such as Horace Greely, Edwin Stanton and future President Rutherford Hayes were willing to do. There was no danger that the South would invade the North. War came only after the North decided to invade the initial seven cotton states. Thus, discovering the War’s causes requires an analysis of the North’s reasons for wanting to coerce the South back into the Union, instead of why the South seceded. The true goal that prompted Northerners to invade the South was to avoid the economic consequences of disunion.

Since the Confederate constitution outlawed protective tariffs, her lower tariffs would confront the remaining states of the truncated Union with two consequences. First, and foremost, a low Confederate tariff would cause Southerners to buy more manufactured goods from Europe as opposed to the Northern states where prices were inflated by protective tariffs. In 1866, for example, railroad iron sold for $80 a ton in America but only $32 in Britain.* Second, the federal government would lose much of its tax revenue since articles imported into the Confederacy would divert tariff revenue from the North to the South.

Palen’s analysis also falls into a second trap by arguing that rates were too low in 1861 to provoke a War, even if increased. Such arguments typically compare customs duties in 1860 to earlier years but ignore their steep and protracted rise during and after the War. It should be understood that the victors’ conduct after Appomattox better reveals his true motives for militarily subjugating the South than does his dubious rhetoric before the fighting began. 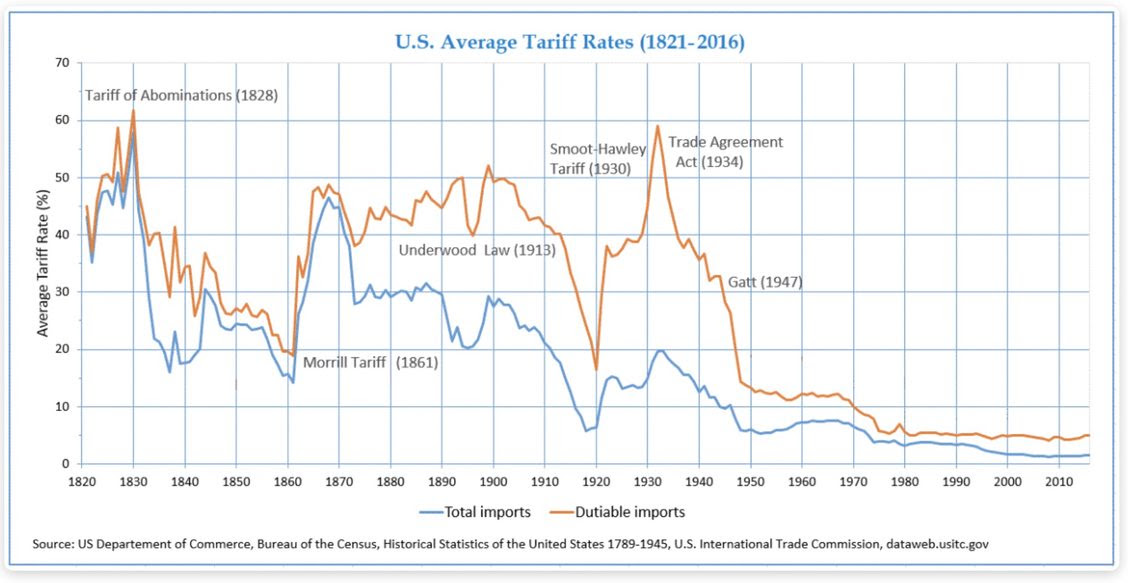 On the eve of the Civil War rates on dutiable items averaged 19% but thereafter averaged about 45% until Democrat Woodrow Wilson became President fifty years later in 1913. Although Wilson reduced rates, Republicans increased them after regaining control of the federal government in the 1920s. The GOP did not welcome free trade until after 1945 when the region north of the Ohio River and Mason-Dixon Line had virtually no competition anywhere since the economies of Europe and Asia had been wrecked by World War II.

A third Palen error is ignoring the adverse impact of import tariffs on domestic industries that export most of their output. There is no better example than American cotton, which normally exported 75% of its crop annually when the Civil War started. The dominant buyers were Britain and France, which typically obtained the exchange credits needed to pay for American cotton by selling finished manufacture goods to the United States. But high protective tariffs made it difficult for European manufactures to sell their goods competitively in the United States, as noted in the railroad iron example above.

The resulting shortage of exchange credits had two repercussions. One was to motivate European cotton buyers to seek new feedstock sources outside the United States. Thus, high domestic import tariffs invited other areas to compete with American cotton. Notable examples included Egypt, India, West Africa, and Brazil. The other result was to force Europe to buy less American cotton than otherwise thereby shrinking the market—or lowering the prices—for Southern farmers.

Such consequences lasted at least seventy years. When commenting upon a multiyear decline in cotton exports as late as 1935, for example, Assistant Treasury Secretary Oscar Johnston wrote, “The major cause of the decline is the inability of foreign consumers to obtain American exchange [currency.]” Southern farmers needed export markets, but what they got were American tariffs that drove their export customers to seek other sources.**

The myth that needs debunking is that the North went to war to end slavery whereas it truly went to war to avoid the economic consequences of disunion.