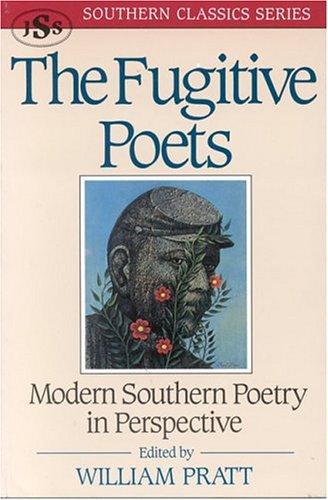 By David MiddletonDecember 8, 2017Blog
No Comments —on the cover of The Fugitive Poets: Modern Southern Poetry in Perspective

in honor of Clyde Wilson

The cover holds us from the poems within,
This young Confederate Davis captured here,
A private guarding gates at two removes,
This painting of a statue of a man.

Yet all we see is something like a bust
And so we must imagine in his hand
A loaded musket, sharpened bayonet,
His hard feet planted firm on rocky ground.

The granite head and kepi, Rebel gray,
Targets of war and weather, pitted, flecked,
Stand out against a background without cloud,
A sky, cerulean, not Yankee, blue.

A crack through cap and temple, cheek and jaw,
Has scarred his face, making it seem a mask
That might be chiseled off to get inside
At sins his countenance must surely hide.

Three climbing vines bring flowers from the earth,
The blood-red petals circling dusty gold,
With lance-tip leaves, to nestle and caress
This man of stone to whom they try to cling.

The soldier stares far off yet deep within,
Haunted by all that cannot be undone,
Still resolute and stoic, sternly calm,
Unconquered by defeat, or victory.

Home to what little pillage, arson left,
Ashes of barn and farmhouse, slaughtered stock,
And Reconstruction that went on and on
For one who owned no mansion and no slave.

In time his history became our myth
With Butcher Grant and Lee the Cavalier,
The Lost Cause, General Order No. 9
We knew by heart, our Gettysburg Address.

And we erected statues in the squares
And gave our streets and children heroes’ names,
Preserving what was best in what they were,
An “Other” that modernity abhors.

And those same years we bore, alone, apart
The consequences of a world we shared,
The northern slave ships bound for Africa
With rum that built those great Rhode Island homes.

And now iconoclasts deface, destroy
Whatever threatens them, complexities
They could not stand to find inside themselves,
New Puritans whose world is black and white.

All this is there in that young Rebel face
Paul Davis painted—steadfast, fugitive—
With memories of a past the future holds,
The War that never seems to have an end.

And in this book his granite statue guards
Are poems redoubtable, in well-plowed rows,
Ransom and Warren, Davidson and Tate,
A new New South much older than the Old.

And in those poems, and others of their kind,
Beyond destruction, lies a pastoral land
Where black and white might blend in weathered gray
When gates unlatch and flowering vines entwine,

The clinging green, red, gold, cerulean blue
All heralding a realm not far behind
This painting of a statue of a man.
We know, without the saying, where it is.