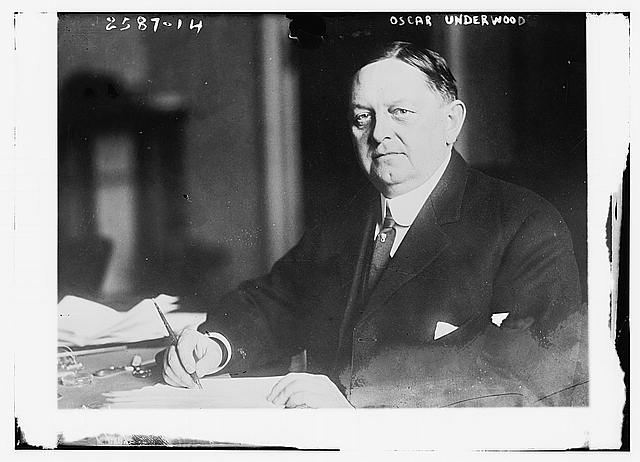 “What right have we to be generous with the money of our constituencies to help a foreign people?”

Delivered by Oscar Underwood of Alabama in the House of Representatives May, 1902.

Mr. UNDERWOOD. Mr. Speaker, on Saturday last, when this bill came from the Senate, it was proposed that it should be taken up at once and considered by the House without, going through the usual channels of consideration. I insisted that lie-fore action was taken by the House the bill should go to the Committee on Appropriations, where the matter could be investigated. I think such a course is proper with all propositions of this kind.

My objection at that time was not merely because I was opposed to the bill, but because I thought the usual course should be pursued under the circumstances. This morning the Committee on Appropriations have brought in a bill, agreed to unanimously by the Republican and Democratic members of that committee, declaring that, in the judgment of the committee, this appropriation should lie made. I do not think it wise or expedient or proper to pass this class of legislation; but under the existing circumstances in this case, although I know my single objection might kill the bill, I am not willing to stand in the way of legislation and say that I must determine the question, not my colleagues on the floor of this House. Therefore I have not renewed my objection to the bill. But I wish to state why I intend to vote against it.

There is no man on the floor of this House who has more sympathy for those who are in suffering and distress than I have. I doubt whether there is a man within the sound of my voice whose heart does not go out in sympathy toward those poor suffering people. But there are thousands of suffering people throughout this world with whom we sympathize to-day and will in the future. We stand not here, my colleagues, to legislate on our sympathy or the impulse of our heartstrings. We stand here as the trustees of a great people, a generous people, a kind people, an impulsive people when distress stares them in the face. But because our constituency may open their hearts and yield to their impulses and be guided by that great, that divine principle of kind feeling and charity toward those who are in suffering and distress, does it mean that you and I. as the trustees of those people, should be reckless in our guardianship of the trust that has been delegated to us and left in our hands to administer? I think not.

Here are a people to the south of us, 1,600 miles from the coast of Florida, who have met with a fearful calamity. They are subjects of the Republic of France—a great nation, a powerful nation, a nation of wealth, a nation whose proud boast is that it has always taken care of its own people and is always able and walling to do so. The island of Martinique, where this great disaster has taken place, is surrounded by other islands belonging to the Republic of France. The public dispatches tell us to-day that there are vessels of that nation in that vicinity and that “the French Chamber of Commerce has appropriated $100.000, and has ordered those vessels to succor the distressed.” The French nation is proceeding with her war vessels and her money to take care of her own people. She has not asked us to interfere in the matter.

If the Republic of France were unable to take care of her citizens. if she were in distress and needed our help, it might be another matter. But, my fellow-citizens, I say that we owe a duty to our own people, a higher duty than we owe to the people of France. Our own citizens to-day are raising funds from their own pockets to contribute aid to our suffering neighbors. It is right, it is generous, it is just that they should do so. It would be right and generous and just for yon and me to go into our own pockets and take out our own money and send it to the needy and suffering citizens of France. We may be generous with our own money, but I ask you what right have we to be generous with the money of our constituencies to help a foreign people? I know of none….

I have no desire to make that man by force of law contribute that is too mean to sympathize and feel sorrow for suffering humanity about him when he can go down in his own pocket and pay for it, and I say that if the men on the floor of this House who want to show their sympathy for a suffering people will go down in their own pockets and foot the bill that they will be properly expressing the sympathy they have in this matter instead of taking the money out of the pockets of their constituents to pay the bill, whether their constituents like it or not….

Now, I say, in the next place, that I do not believe that this is a dignified course for a great nation like this to pursue. I think it would have been very proper and very right for the President of the United States, immediately on hearing of the disaster at Martinique, to have telegraphed the American ambassador at Paris to express to the President of the French Republic our sincere sympathy in the great calamity that had happened to his people. Nay. I would go further than that. If our war vessels were lying off that coast and it was necessary to have ships to save the lives of those people and get them away from that burning lava, I would not have asked Congress, but I would have ordered the vessels in there to take them off that day and hour. That would have been proper and that would have been a case of emergency; but when you say that we must express our sympathy to those people by going into the pocket of somebody else and making them pay for our sympathy I can not say that I believe that that is the duty of a member of this House.

What I say is that this is not the proper way for us to take care of other people. I know there are hundreds of men in this House—perhaps hundreds are too many, but there are many men in this House—able gentlemen, honest men, men of large hearts and conscience, men that believe just as does the gentleman from Wisconsin, that we are a great nation and that we have great power to raise money by taxation; that we have an overflowing Treasury, and that we ought to distribute it to all mankind, but I do not believe that I was elected here for that purpose. I do not expect to prevent the passage of this bill, but in my own humble capacity I desire to say that I do not believe it is right to express our sympathy or our sorrow with the money of our constituents, and I do not think it is a dignified course for this Government as a government to pursue.

Oscar Underwood (1862-1929) served in the United States House of Representatives and the United States Senate from the State of Alabama. He was born in Kentucky, studied law at the University of Virginia. After being defeated for re-election to the Senate in 1926 because he opposed the Ku Klux Klan in Alabama, he retired to "Woodlawn Plantation" in Fairfax, Co., VA (at one time part of Washington's estate) where he died in 1929.
View all posts