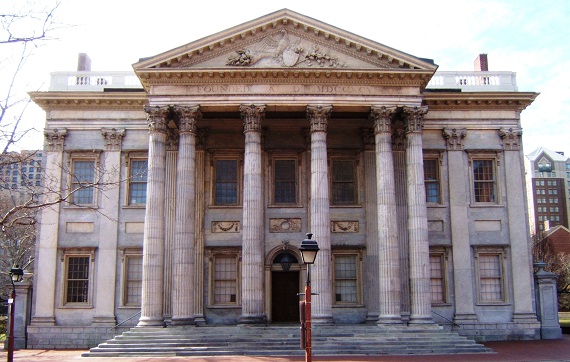 By John DevannyNovember 23, 2020Blog
No Comments

The chief conflict in American history was and remains the conflict between the center and the periphery.  Geographically, this conflict plays out as a powerful antagonism between the large, urbanized, metropolitan areas of America and their satellite college and university towns, and the less densely populated small towns and rural areas.  In the political and financial realms, the conflict is between the champions of the consolidation of political and financial power, the neo-Hamiltonians, and the sparse collection of surviving Antifederalists, Jeffersonians, Libertarians, and Paleo-Conservatives who oppose this consolidation.  In our day, the neo-Hamiltonians clearly enjoy the upper hand.

The empirical evidence illustrating the enviable position of the neo-Hamiltonians is overwhelming, most especially in the economic realm.  The question of “Who owns America?” arises often in American history, was addressed in a volume of essays of the same title published in the 1930s and edited by the journalist Herbert Agar and the poet and critic Alan Tate.  The dominant perspectives in the collection were broadly Distributist and Southern Agrarian.  Thus, the approach of many of the authors tended toward the literary or humanities perspectives with relatively little quantification of the centralization of American economic life.  While Disraeli’s dictum should always be kept in mind when using numbers, “Sir, there are lies, damn lies, and statistics!” quantifying some of the more important aspects of the current state of property and financial ownership provides a powerful image of the reality of our situation.

The state of land ownership is startling.  Over one-third of the land in the United States is owned by the federal, state, and local governments, with the lion’s share (28.7%) owned by the federal government (Congressional Research Service).  Eighty-two percent of non-home real estate is owned by just ten percent of American households.  The top 100 largest landowners in America own real estate the equivalent size of New England minus Vermont, an area of approximately 40.2 million acres (Wolf, Household Wealth Trends in the United States, 1962 to 2016, National Bureau of Economic Research, November 2017; The Land Report, 2017).  Thirty percent of American farmland is leased out and not owned by the farmer.  Meanwhile, as farmers age and the median age of farmers is now fifty-five, farmland is attracting investment from both Wall Street and overseas.  Iowa farmland brought an inflation adjusted return of 624% from 1970 to 2016.  It is no wonder farmland remains an attractive hedge and it is also no wonder that foreign investors are increasing their holdings of American farmland.  Total foreign ownership of American farmland is around 25 million acres, an area the size of the state of Virginia (Kieffer, “Who Really Owns America’s Farmland,” The Counter, July 31, 2017). With respect to residential real estate, the Federal Reserve Bank now holds thirty percent of American mortgages, almost seventy percent of mortgages are held by various agencies of the federal government (The Federal Reserve Statistical Release, October 1, 2020; Kaul and Goodman, “The Price Tag for Keeping 29 Million Families in Their Homes: $162 Billion,” Urban Wire, March 27, 2020).

Corporate ownership exhibits similar consolidation. Circular ownership structures have resulted in the largest insurance and investment banking companies owning large portions of each other’s stock, as well as controlling vast blocks of common stock of corporations through their custodianship of index funds.  Corporations such as Blackrock, Vanguard, and State Street wield enormous influence in the formation of corporate policy and governance via their funds’ ownership of vast amounts of common stock, all of which they can vote at corporate shareholder meetings.  When one adds to this the revolving doors between federal regulatory agencies and corporate boards and management, regulatory capture, and powerful financial and informal ties between politicians and Wall Street, one can only conclude that the neo-Hamiltonian political economy is well entrenched.  In retail a similar situation prevails.  Twelve corporations control over 400 retail brands. Ninety percent of the legacy media of all kinds, print, television, movies etc. is owned by ten firms.  American political economy has never been so centralized and so consolidated.

A question raised by the data above is how did we Americans, who pride ourselves on our love of liberty and opportunity end up with a financial and political system controlled by the future residents of the sixth, eighth, ninth circles of Hell? One thing that is sure is that the triumph of the neo-Hamiltonians was not the result of free markets or “social forces.”  In political economy, system implementation results from the actions of individuals who consciously choose policies designed to achieve certain ends, be they in the private or public sectors.  Capitalism, defined as the employment of capital by any morally lawful and useful means in the act of producing goods and services to acquire wealth by making a profit, can survive and thrive in a variety of political climates, witness China and Vietnam.  Crucial to making profits is the management of risk and the preservation of capital.  The free market provides means for risk management: insurance, diversification, and asset allocation strategies come to mind.  Some capitalists are not above using the public sector for this purpose.  Two proto capitalists were expert at this, Jacques Couer and the Fugger family.  Couer was able secure royal exemptions from local guild ordinances, as well as royal investment in infrastructure in return for loans and gifts to the French crown.  Couer successfully shifted a significant portion of his capital expenditures and transaction costs onto the backs of the French tax paying subject.  The Fugger family were able to do this on an international scale, which not only provided them with a significant competitive advantage over their competitors in mining and finance, their efforts also provided them with significant influence in European international politics.

This influence is well attested to in a letter that Jacob Fugger wrote to his Imperial Majesty Charles V in 1523,

“It is well known that Your Imperial Majesty could not have gained the Roman Crown save with mine aid . . .. In this matter I have not studied mine own Profit. For had I left the house of Austria and been minded to further France, I had obtained much money and property, such as was then offered to me. How grave a disadvantage had in this case accrued to your Majesty and the House of Austria, Your Majesty’s Royal Mind well knoweth” (Ehrneberg, Capital and Finance in the Age of the Renaissance, 80).

The Couers and Fuggers of the world are still with us on Wall Street, Fleet Street and the other financial centers of the world.  They were successful in Europe and later in America in expanding state acts of incorporation to include firms that were focused on pursuing profit than merely providing a public good.  When the practice of incorporation first made its appearance in the English-speaking world during the middle ages, kings granted corporate status to universities who were pursing the public good of education.  In the early modern era, joint stock companies were awarded charters of incorporation such as those that settled Jamestown and Plymouth.  After the ratification of the constitution in the United States, state governments in New England were awarding charters of incorporation to grain mills.  The mills often interfered with water flow to their downstream neighbors, but states ignored the riparian common law rights of the mills’ neighbors on the grounds that the grist mills provided communities with a public good that nullified the private rights of their neighbors to unimpeded water flow.  Perhaps the most egregious abuse of the public goods argument for incorporation occurred in New York city. Aaron Burr, the nemesis of Alexander Hamiltonian, broke the Federalist monopoly on banking in the city in an especially devious manner.  Burr claimed he wanted a charter to establish a much needed water company for the city.  The charter’s application included a provision for investing the company’s surplus revenue in any lawful venture or enterprise the company found prudent.  Once the charter was granted, Burr’s company, The Bank of Manhattan, dropped all pretense of supplying water to the city, and instead focused its operations on banking and finance.

Such escapades as Burr’s rendered the public good test for incorporation a dead letter; it was not long before corporations were granted limited liability and over time a whole array of rights under the law enjoyed by individual citizens.  These corporate rights, immunities, and protections do not have their origin in free markets, they all originate in positive law passed by state and federal legislatures and in court decisions rendered by judges.  The marriage of capital and political power, a cornerstone of Hamilton’s policy, was the result of corporate rent-seeking, risk management undertaken by governments on behalf of corporations, and legislation, not the free market.  Sadly, the convergence of corporate and consolidated political power has been the dominant trend of the modern era of history since the 1600s.  The consolidation of national states, state central banks, chartered and privileged corporations all trace their ancestry to the seventeenth century.  What then of Hamiltonian’s great opponent, Thomas Jefferson?  Where does Jefferson and his fellow republicans fit into the dominant consolidationist trend of history?

Truth be told, the Jeffersonians were very much out of step with the march of history, even more they stood astride it. However much this or that American republican read or admired some figure of the Enlightenment, or dressed their rhetoric in the phrases of John Locke, the heart of Jeffersonian opposition to the consolidation of the political power and the marriage of state and financial capital had its origins in the English opposition.  Broadly speaking, this includes such disparate groups as Old Whigs supporter of the Glorious Revolution, Country Tory opponents of Robert Walpole’s administration, the Commonwealth men such as Thomas Gordon and John Trenchard as well as the old Roman republican tradition.  What was an opposition movement in England became the dominant political trend in the United States of America from the mid-eighteenth to the mid-nineteenth century.  The United States was an agrarian country then, the memories of the British attempt to re-impose and enforce a regime of imperial mercantile economic policies was still fresh in the minds of many Americans, and the classical liberal tradition in economics was dominant.

The availability of land, and the relative difficulty of the federal government to project its authority and control into the wide interior of the country allowed Americans to pursue unimpeded new opportunities far from the center of American political and financial power. It is no accident that the great military conflict that dealt the Jeffersonians a mortal wound was waged during the first industrial revolution, the ascendancy of the railroad, and the emergence of the telegraph.  Ironically, the Republican Party, who invoked the memory of Jefferson in their name, championed the very regime of tariffs, national banks, railroad subsidies, and federally funded internal improvements, the whole package of nineteenth century political and financial consolidation.

On reflection, given the larger historical trends since the 1600s, it is surprising the Jeffersonians gained and maintained power in the United States for as long as they did and that they were able to implement most of their program of limited government.  One might be tempted to discouragement, seeing in the Jeffersonian moment a lonely outlier, and aberration of liberty, states’ rights, and local governance brushed aside by the winds of war and the dominant global trend toward the consolidation of political and financial power.  Yet, another way to view the matter is to appreciate the ability of the Jeffersonians to “buck the trend.”  For localists and regionalists everywhere, this should give some cause for hope.