By Jonathan HarrisNovember 9, 2018Blog
No Comments 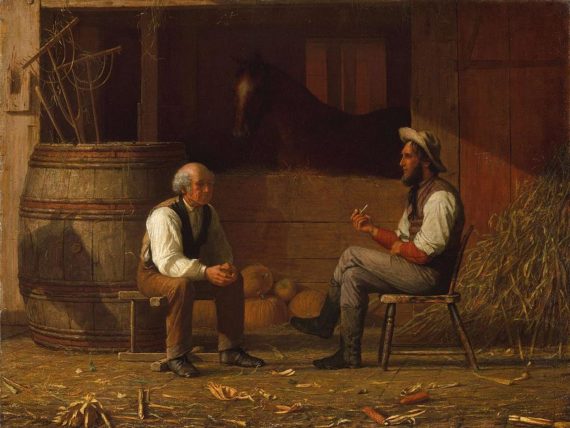 The study of history cannot be neatly contained behind the tall foreboding doors of an ivory tower nor swept under the rugs of dusty corner offices housing stacks of paper. It bleeds into other fields as it serves to inform both individual and group identity. It gives context to the current world and helps one understand their place in it culturally, socially, and spiritually. The modern disinterest in studying history has more to do with a lack of identification with the subject matter presented than it does an actual disdain for stories of the past.

Joyce Appleby, a former history professor at UCLA, sought to explain this controversy as a somewhat unsurprising development given the collective nature of history and the cultural change occurring in American culture. For example, Appleby, in discussing the inclusion of African-American experiences into the greater story of America, tells us that “incorporating these details of the African-American experience in national history . . . proved almost impossible, because they represented such an indigestible element in the tale of American democracy (Appleby, Telling the Truth About History, 299). In other words, the traditional consensus would not stand for African-American history that shown poorly on the greater narrative. Part of Appleby’s solution for attracting interest in the subject of history while avoiding the discarding of traditional concerns was to democratize the subject along pragmatic lines. A moderation intended to include newer groups who have been allegedly left out of the American story while still maintaining an overall group cultural identity was the goal.

Appleby’s solution comes across in some ways as overly naive and optimistic. If her assessment is accurate the question then becomes, “Are disenfranchised groups desiring their cultural stories to be incorporated into the larger American story?” Perhaps this is taken for granted since the battle Appleby may have been observing was being played out in board room tug of war matches located in American history textbook manufacturing plants. It would be nice to think that everyone could “just get along,” but this is rarely the case over something so fundamental to national identity. The question is not asked, “Why do Irish, Italian, Jewish, German, and perhaps many Asian cultures not seem (broadly speaking) to have the same problems identifying with the American story as other minority groups, though they experienced varying degrees of bigotry as well?” Could it be that certain groups are not interested in history, especially American and Western history, not because they do not feel included, but rather because they fundamentally have a dislike or disagreement with the country in which they reside. They simply do not wish to identify. Perhaps the common ground with one’s culture necessary for even forming an identity is not present. It is likely that the only exposure to American or Western history known by many is a negative. Since the divide in this matter is also generational, this would certainly suggest that the proposed solution will not work. Appleby may as well have been trying to un-poison a well in that case.

So how can history be made more relevant? Most humans do not wish to know a great deal about something they find offensive. Repulsion gives birth to avoidance. After all, if one knew their great-grandfather was a horse thief, drunk, and a swindler, how much more about their grandfather would they want to know, and would they ever make one of their children his namesake? If parents are not engaged in civic duties, families are too broken down to impart identity, and Hollywood produces art that vilifies American heroes, teaching names and dates will not suffice to cultivate an interest in a topic thought to stink in the first place. Though it be an up-hill battle, perhaps the only option available to the historian is to first become the philosopher. If the values passed down through law, legend, and lore are castigated as fundamentally offensive, then the values themselves are what need explanation and defense first, not the stories that flow from them.

If one thing remains clear it is this: All people use standards by which to judge those who preceded them. If the theme of American history is to be “how the people of the United States did terrible things and continue to do terrible things,” it would not come as a surprise that such a course would need to be mandatory in order to have any participation. The more moderate alternative (hinted at by Appleby), “how the people of the United States failed to live up to their values but are getting better” is not much of a rallying cry either. If the standard of measure for judging the past happens to be egalitarianism, there does not seem to be any way of recovering an interest in American history as a identity marker. Its main function will most likely be sacrificed on the alter of identity politics.

This piece was originally published at Conversations That Matter.