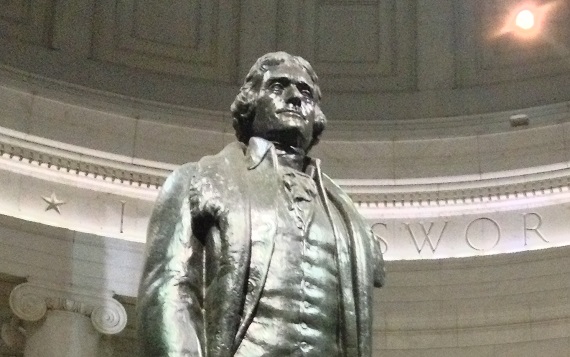 The numerous declarations among “right-wing” websites, blogs, and print publications usually present a conundrum of any given thoughts among them. It is like a string of firecrackers exploding. They are necessarily lighted in sequence but seem to sound in explosive randomness.

But being “right-wing” doesn’t necessarily mean being right. It just means being not “left.”

Jefferson advised the United States to seek the friendship of all nations but enter into “entangling alliances” with none.

Even before Jefferson, in his farewell address, George Washington had admonished the republic to beware of “entangling alliances.”

The “anti-Southern” line above is obligatory herein simply because the South always tried to maintain the republic and the North wanted to mutate Jeffersonianism into the Hamiltonian-Lincolnian (Fox News) national state painted as a (ghastly) democracy. The “Southern line” line itself divides true conservatives from the rest of the political pact—left, right or other. This Hamiltonian-Lincolnian mystique is (and always has been) the Republican party; NOT Jeffersonianism.

Historically it certainly isn’t the histrionic grift of the likes of Victor Davis Hanson or Newt Gingrich. Often the two sound as if their primary source is Brian Kilmeade or Sean Hannity (more comedic less grift). Listening to Davis and Gingrich, petty pirates of history is like having poison Ivy on the brain. You can only grimace because you can’t reach inside and scratch. It is like watching T.V. “news” for news—good luck! You might wonder how people can be paid so much to say so little. A better waste of time would be to watch the Olympics or the NBA.

From the birth and period of the Jeffersonianism republic, 1787 until 1860 no more prosperous country on earth existed on earth. A republican union.

So bright a light that Switzerland adopted, and has kept until this day, possibly, the most prosperous and secure country on earth, per capita. One where its central government cannot pass an original tax.  Only the sovereignty of the people in their cantons (states) can authorize taxes, And at that only for a predetermined time by the cantons. And there is no national bank to print money for unconstitutional twenty-year wars. This they copied from the Jeffersonians (conservatives).

Switzerland, fortunately, has had no Lincoln or Hamilton. They have stayed true to the pure republican faith.

A summary of thought from the Southern Jeffersonian republican mind, as currently running among the media, is that the 1776 project is as preposterous as CRT. Both are the mental magic of comic book historians. A contemporary analogy would be that these two “studies” are as sound as today’s medical minds demanding people wear masks to prevent disease transmission or people should be vaccinated even at gunpoint. The comparison is not a light one. When Jeffersonian Conservatism died—YES, in 1865– the central government beast became the Grendel to every aspect of life in the new “nation.”

Sadly, all the potential Beowulfs were disarmed at Appomattox

The central government (“federal” is a pitiful misnomer writ large) can do what it wants—anywhere from Washington to Afghanistan.  But, not to worry, each area has an equal opportunity hostage plan.

Congress? Good grief, grow up. We have a “democracy.” Ask Fancy Nancy about that. Or even the prince of the Southerners (bigots all, of course) Mitch McConnell.  These two money-makers in congress are only jokers from a deck of 535.  Then read the Ox-Bow Incident for your homeschooling on “democracy.”

Trash thinking like CRT and erroneous historical lies like Project 1776 (Lincoln was not “Honest” Abe) are merely symptoms of a government that can launch twenty-year wars, lose and cripple lives of young men (and sadly even women). It can give over assets and in the end, forge a so-called “Commander-in-Chief” from a necessarily (and clearly) corrupt “democratic” process.

But who will listen to such bigotry? Jefferson, like most Southerners, was a racist we are told by the media and today’s political gods. Such bigotry can only come from the seeds of Southerners whose DNA is mapped in slavery.

As the pretty boys and girls of the political classless and sophomoric call, it—“The Original Sin”—apparently only the South had a hand’s touch on the mark of slavery!  No group of people in any hemisphere black, white, red, or yellow at any time EVER touched the “racist” idol of slavery, except the American South.

Statues and flags down South are only on display.  We do not worship idols. They exist in our hearts.  They will never be hidden from our souls.

They represent the Jeffersonian republic. And you non-Jeffersonians keep pretending that you can correct problems like Afghanistan that you created in the first place.

One day you can build statues of the three amigos, Milley, Austin, and Biden to replace Robert E. Lee, Christian soldier.

Put on your masks, stick needles in your arms. Do as you are told—just like they do in Afghanistan–catastrophe that it is.

Hell, you even surrendered at Appomattox and you don’t even see it.